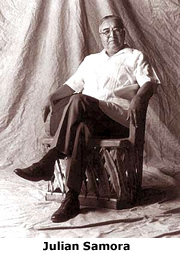 Graduates of legendary sociologist Julian Samora’s Mexican-American Graduate Studies Program at the University of Notre Dame will reunite on campus Thursday to Sunday (Oct. 12 to 15) to pay tribute to their late mentor and participate in the “Beyond Borders: Samora Legacy Conference 2006.”

Samora, a pioneering scholar of Mexican-American studies, paved the way for Latinos to understand and study themselves at the university and policy-making levels, to understand the complex relationships between Mexicans and Mexican-Americans, to begin the study of Mexican immigration, and to ready the United States for the reality of Latinos as the nation’s fastest growing minority.

The first Mexican-American to earn a doctorate in sociology, Samora was a co-founder of the National Council of La Raza and served on the Notre Dame faculty from 1959 until his retirement in 1985. He died in 1996 at age 75.

Hosted by Notre Dame’s Institute for Latino Studies (ILS), the event is co-sponsored by the Samora Legacy Project, the Notre Dame Alumni Association and the Graduate School. It will include keynote speakers and panel discussions with faculty, staff, alumni and students who studied with Samora.

Featured speakers include the following:

A detailed schedule of events is available at http://www.nd.edu/~latino/outreach/samora_schedule.htm . Registration for the conference, which is open to the public, will be held in McKenna Hall.

The Julian Samora Legacy Project , created by colleagues, students, friends and family of Samora, was designed to make a new generation of students, scholars and community leaders aware of his contributions to Latinos in the United States. It assembled a consortium of partners to develop, catalogue and distribute material from the Julian Samora Archive at the University of Texas. In addition to the Benson Library at Texas, other consortium partners are the ILS at Notre Dame, the National Council of La Raza, the University of New Mexico, and the Julian Samora Research Institute at Michigan State University.