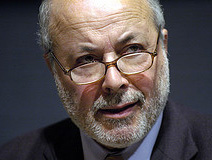 Juan Guzmn Tapia, the Chilean judge known around the world for indicting Augusto Pinochet, will present a lecture titled “Human Rights During and After Chile’s Dictatorship” Nov. 13 (Thursday) at 4:15p.m. in the auditorium of the Hesburgh Center at the University of Notre Dame.

Co-sponsored by Notre Dame’s Kellogg Institute for International Studies and Center for Civil and Human Rights, the lecture is free and open to the public.

Currently director of the Center for Human Rights at the Universidad Central de Chile, Guzmn will speak about his prosecution of Pinochet after he was appointed in 1998 to investigate charges against the former dictator and his murderous regime.

A film on the confrontation between Guzmn and Pinochet will set the stage for Guzmn’s lecture. “The Judge and the General,” which follows the twists and turns of the efforts of Guzmn and others to overcome Pinochet’s immunity and claims to be too ill to stand trial, will be shown Nov. 12 (Wednesday) at 7:30p.m., also in the Hesburgh Center auditorium. The screening is free and open to the public.

Produced and directed by Elizabeth Farnsworth and Patricio Lanfranco, the film explores whether Chile can find truth and reconciliation through a legal accounting of its recent violent past.

For Guzmn, a man who says that his investigations “opened the eyes of [his] soul,” there is one clear choice: “A wounded country needs to know the truth.”

The screening is a collaboration with the award-winning PBS documentary series P.O.V. ( www.pbs.org/pov ), the Kellogg Institute and the Center for Civil and Human Rights.

A conservative judge, Guzmn—who had supported the coup—took his job as investigator seriously, pressing ahead with the case despite intense social and political pressure to desist. Guzmn’s memoir has been a bestseller in Chile, which continues to vigorously debate the period.

“The Judge and the General” follows two of Guzmn’s investigations. One is the killing of a young sociology professor during the “caravan of death,” when Pinochet’s right-hand man, General Sergio Arrellano Stark, flew in a helicopter from town to town, listing the names of those to be executed. The second involves a law student and political activist who disappeared, whose mother was forced to lead Pinochet’s secret police to her daughter’s hiding place in order to save her granddaughter’s life.