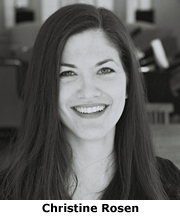 Christine Rosen, editor of “The New Atlantis: A Journal of Technology and Society,” will speak on “Convenience, Control, and Other Technological Virtues” at 4p.m. April 11 (Wednesday) in the University of Notre Dame’s McKenna Hall auditorium.

Rosen has written and lectured widely on the history of genetics, bioethics, the fertility industry, and the social impact of technology. She is the author of “Preaching Eugenics: Religious Leaders and the American Eugenics Movement,” a history of the ethical and religious debates surrounding the eugenics movement in the United States, and, most recently, of “My Fundamentalist Education,” which the Washington Post Book World named one of the best nonfiction books of 2006.

A fellowfor the Project on Biotechnology and American Democracy at the Ethics and Public Policy Center in Washington, Rosen also is an adjunct scholar at the American Enterprise Institute for Public Policy Research, where she writes about women and the economy, feminism, and women’s studies.

Rosen’s lecture is sponsored by Notre Dame’s Center for Ethics and Culture as its spring 2007 Schmitt Lecture. The Schmitt lectures, made possible by funds from the Arthur J. Schmitt Foundation, concern the moral, political and religious dimensions of science and technology.

Originally published by Michael O. Garvey at newsinfo.nd.edu on April 04, 2007.