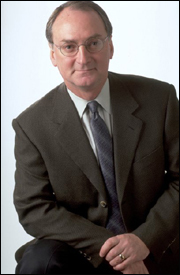 John B. “Jack” Swarbrick Jr., a Notre Dame graduate who has risen to national prominence as a lawyer, consultant and executive in the collegiate and Olympic sports industries, was appointed today (July 16) as the University’s 12th director of athletics.

Notre Dame’s president, Rev. John I. Jenkins, C.S.C., introduced Swarbrick at a news conference on the top floor of the University’s Hesburgh Library. The appointment is effective immediately.

“As most of you know, the Notre Dame mission is a combined commitment to excellence in undergraduate education and in research, scholarship and creativity, all in concert with our unwavering commitment to Catholic values and teachings,” Father Jenkins said. “Added to that is our long tradition of success in intercollegiate athletics, both on and off the field. Finding an athletics director who fits with this multi-faceted mission is no easy task, but we were fortunate to have many outstanding candidates, both internal and external. We looked closely at some 30 potential candidates, and I am confident that Jack Swarbrick will be a superb athletics director for Notre Dame. I am delighted that he has accepted our offer and look forward to working closely with him.”

At the same time that Swarbrick began his career, the city of Indianapolis was beginning its effort to become a world-class center for amateur and professional athletics. An employment law specialist, Swarbrick soon shifted his focus to sports and quickly became active in the city’s initiatives.

As a member of the Indiana Sports Corp., including the chairmanship from 1992 to 2001, Swarbrick led many of the city’s successful proposals to a wide array of athletics organizations – from the NFL to the U.S. Olympic Committee to the Big Ten Conference. His leadership efforts have resulted in the city:

Swarbrick’s work has focused on the representation of owners of sports teams and organizations which sanction or conduct athletic competitions. He has served as general counsel for numerous national governing bodies of Olympic sports, including USA Gymnastics and USRowing, and as a consultant to the 1996 Olympic Games. He also served as president and chief executive officer of LMiV, an Internet-based network of radio stations.

In his work as an advisor to the NCAA, Swarbrick has:

Before accepting the offer to lead his alma mater’s athletics department, Swarbrick had been a finalist for several high-profile positions in college athletics, including president of the NCAA and commissioner of the Big 12 Conference.

What They’re Saying About Jack Swarbrick

Myles Brand, NCAA president:
“Notre Dame should be congratulated for reaching into its very talent-rich alumni bank to make this hire. Jack Swarbrick’s extraordinary skills have been apparent to the city of Indianapolis and to the NCAA for some time. He has successfully managed large, complex projects on numerous occasions; indeed, he always exceeds expectations. I predict the Notre Dame faithful will discover they have a real gem.”

Mitch Daniels, Governor, State of Indiana:
“Notre Dame was wise to land Jack Swarbrick before someone else did. His sports experience and business skills are proven and obvious, but in particular it’s his ethics and integrity that make him a perfect match for this assignment as steward of the values that make Notre Dame unique.”

Chuck Wielgus, Executive Director, USA Swimming:
“Jack Swarbrick is both a visionary and a pragmatist. He is a thoughtful leader who will challenge others to change, while simultaneously exhibiting an appreciation for Notre Dame’s rich history and traditions. In so many ways, Jack is the perfect choice to lead Notre Dame athletics into the future.”

Steve Penny, President, USA Gymnastics:
“Jack is a visionary and strategic leader with a strong sense for serving the best interests of great institutions such as Notre Dame. His outstanding leadership skills have helped to transform Indianapolis into one of America’s premier sports communities, and his experience – especially with the NCAA – will be a valuable asset to the University.”

Jim Delany, Commissioner, Big Ten Conference:
“Jack is a superb professional who has spent his career in law, business and athletics. He’s had interest in a position like this for the past few years, and this seems like a perfect fit for both the institution and the individual.”

Joe Kernan, President, South Bend Silver Hawks; Former Governor, State of Indiana; Former Mayor, City of South Bend:
“Jack is very smart and is highly respected by everyone that I know who has dealt with him. I’ve seen him in action and he knows what he’s doing. He has a great sense of humor. He gets things done and done the right way. He loves Notre Dame. I think he will be a great fit for this job at Notre Dame as well as in the community. Jack is a great choice.”

Max L. Siegel, President Of Global Operations, Dale Earnhardt Inc; Notre Dame Law School Graduate:
“Jack Swarbrick will be a tremendous asset to the Notre Dame athletic program. He is a proven leader, a strategic thinker and a team player. Jack”s unique skill set, vast experience in amateur and professional sports, as well as his vision will both sustain and enhance Notre Dame’s position as a leader in college athletics."

Michael O’Hara Lynch, Head of Global Sponsorship Management, Visa Inc.; Notre Dame Graduate:
“Jack Swarbrick is the perfect choice to lead the University of Notre Dame athletics in the many years to come. No one is more knowledgeable or highly regarded in the world of college sports than Jack. In addition to being a great human being of sound character, he is one of the smartest people in the business. As a proud alumnus, I couldn’t be
more thrilled for the future of Notre Dame athletics.”

*Wallace I. Renfro, NCAA vice-president and senior advisor to the president:

Originally published by Dennis Brown at newsinfo.nd.edu on July 16, 2008.