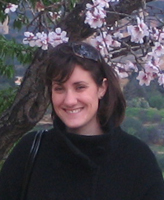 Elizabeth Simari, a College of Arts and Letters alumna from 2008, crosses Saint Peter’s Square on the way to and from work, shops at the Vatican’s grocery store, and has even had the Pope drop by her office.

“It’s an amazing experience,” says Simari, who works for the weekly English edition of the Vatican newspaper, L’Osservatore Romano. “I feel blessed to have these once-in-a-lifetime opportunities.”

Reporting from Rome, the former Italian and English double major at the University of Notre Dame helps document nearly everything the Pope does, from making statements on hunger and famine in Somalia to announcing a new iPhone app for World Youth Day.

As one of five people who work on the English edition of L’Osservatore Romano, Simari’s job includes writing, editing, and design, as well as translating papal speeches and letters into English—a real test of her abilities in both English and Italian.

While family roots in southern Italy prompted Simari’s initial interest in the Department of Romance Languages and Literatures in Notre Dame’s College of Arts and Letters, she was not at all familiar with the language when she enrolled in beginning Italian.

“I didn’t know what it would be like, but it excited me,” she says. “It was the first class I ever had at Notre Dame—and my interest has never ceased since.”

What started as a minor in Italian quickly changed into a supplemental major and then, finally, a full major. After college she moved to Sicily where she taught English and developed her language skills. She then went on to get a master’s in Italian at Middlebury College in Florence before moving to Rome.

Simari loved studying Italian, but because the language was so new to her—”I was still figuring out how to say ‘pencil’” she says—she began looking for a major that would help her say a little bit more. That led her to the Department of English.

Combining the two majors, Simari says, helped her develop the ability to not just understand and speak Italian, but to think critically, read and interpret complex texts, write clearly and concisely, speak effectively, and look at issues from a more global perspective. Studying abroad was also invaluable, she says.

“Spending time in another country gets you to appreciate things about the culture and people that you could never possibly learn in DeBartolo Hall,” Simari says.