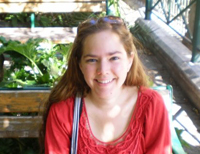 Anna Michelle Martinez-Montavon’s passion for languages began well before she came to Notre Dame. Her parents grew up in Mexico and South America, and she grew up in the United States speaking Spanish at home as her first language. She learned English while in daycare and then studied French in middle school. Now in college, she’s fallen in love with yet another language.

“But as soon as I got there, I realized I had been staying in the architecture program in order to learn Italian and travel to Italy,” she says. “I left the program at the semester and came back to Notre Dame to change my major.”

Now a Spanish and Italian double major, Martinez-Montavon has been an avid student in the Department of Romance Languages and Literatures ever since.

“I have had phenomenal professors in the Italian department,” she says. “Although the classes are hard work, it’s work that I enjoy doing. That lets me be more involved both in and out of the classroom.”

Martinez-Montavon is a senior in the Glynn Family Honors Program, works as a peer adviser to first-year students, and has taken on a senior thesis project that combines her interests in Italian, folklore, and fairy tales. At the suggestion of her thesis adviser, Assistant Professor of Italian Sabrina Ferri, Martinez-Montavon is researching Italo Calvino, an Italian author who published an adapted collection of 200 Italian fairy tales.

“I am interested in why these old folk stories persist—why they keep being retold and re-invented,” she says. “I think it will be especially interesting to look into what values Calvino sees in these stories and how he uses and transforms their themes in his own literature.

“It would be great to make a new contribution to the literature on folktales and Calvino’s writings. Even though many experts before me have written about this topic,” Martinez-Montavon says, “I hope to at least put some connections into a new perspective, clarifying them for myself and maybe for some future readers.”

Despite the extra work, she also recommends other students try doing a senior thesis, too. “If there is something they are really interested in learning about, I would definitely encourage them to write one,” she says. “If they are going to grad school, it would be good practice—and even if they’re not, this may be the only chance they get to become highly knowledgeable about a topic that interests them while working with a real expert here at Notre Dame.”

Martinez-Montavon is thinking about becoming a teacher after graduation, perhaps working abroad, so she can teach one of the languages she has dedicated so much of her time to studying. Her experiences as a student and as a peer adviser have inspired her to mentor others on their journeys of self-discovery.

“I like to help people understand difficult concepts,” she says, “and I enjoy watching young people figure out who they are and what their place is in the world.”