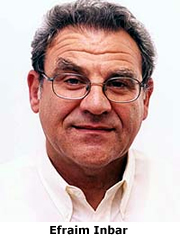 Efraim Inbar, professor of political studies at Bar-Ilan University in Israel, will deliver a lecture titled “Israel’s Security Environment” at 8p.m.Thursday (Feb. 8) in Room C-103 of the Hesburgh Center at the University of Notre Dame. Presented by the Kroc Institute for International Peace Studies, the event is free and open to the public.

Prior to his current reserve post at the Israel Defense Force (IDF) College of Staff and Command, Inbar served as a paratrooper in the IDF. His area of academic specialization is Middle Eastern strategic issues with a focus on the politics and strategy of Israeli national security.

Inbar plans to discuss the impact of broader developments in the Middle East on Israeli security and U.S.-Israel relations. He brings a combination of military and political experience to his perspective on contemporary issues such as the war in Iraq, the political upheaval in Lebanon and the rise of Iran.

A native of Romania, Inbar received his doctorate at the University of Chicago. Among other appointments, he served as a visiting professor at Johns Hopkins University and Georgetown University, and he has frequently lectured at numerous institutions around the world. Inbar is the author of four books, including “Yitzhak Rabin and Israel’s National Security,” and more than 50 scholarly articles. Director of the Begin-Sadat Center for Strategic Studies at Bar-Ilan, he also is a columnist for the Jerusalem Post and widely quoted in the international press.

Originally published by Kyle Chamberlin at newsinfo.nd.edu on January 31, 2007.