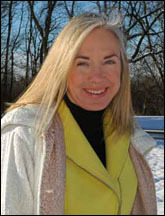 “I felt there was something fated about it,” said Mary P. Corcoran about the invitation to serve as a visiting fellow in Notre Dame’s Keough-Naughton Institute for Irish Studies for the fall semester.

The invitation afforded her the opportunity to teach her specialty — immigration and social change in Irish society — and participate in the institute’s October conference “Race and Immigration in the New Ireland.”

But her sojourn in America also gave her something quite unexpected — the opportunity to uncover the history of her own Irish immigrant ancestors.

Corcoran, a professor of sociology at the National University of Ireland, Maynooth, knew before she arrived that her great-uncle, Brother Ephrem O’Dwyer, C.S.C., had an association with Notre Dame and had been awarded an honorary doctorate in 1976. In the course of her study, she discovered that O’Dwyer, who had been recruited by the Congregation of Holy Cross in Belfast in 1909, had a long and distinguished career as an educator and administrator at Notre Dame, and had served as University treasurer for two years in the 1930s.

“I wrote to Father Hesburgh, and he very kindly agreed to meet with me,” Corcoran said. “He knew Brother Ephrem for 30 years or more, and said that he (Brother Ephrem) was fiercely loyal to his brothers, but was undoubtedly their leader. It was really nice to meet with him (Father Hesburgh). He gave me a lovely blessing as I was leaving, and asked me lots about Ireland and that.”

Corcoran’s paternal grandmother, Bridget O’Dwyer, was Brother Ephrem’s sister, she notes, and of her grandmother’s 10 brothers and sisters, seven emigrated to America from their small farm in County Tipperary. In the course of her genealogical research here at Notre Dame, Corcoran was surprised to learn that Brother Ephrem’s sister Marianne had joined him in Indiana, and spent her life as a nun at Saint Mary’s College.

Corcoran lives in Dublin, where her husband, Alex White, is a Labor Party senator. Corcoran’s children Maeve and Fintan White (ages 15 and 12) accompanied her to Notre Dame for the semester, and attended Adams High School and Edison Middle School.

“They really had a wonderful experience,” she said. “They’ll treasure their memories. Their knowledge of the American school system was from television, `Beverly Hills 90210.’ Multi-cultural classrooms are well-established in America, but something new in Ireland.”

Ireland is grappling with the same sorts of issues of immigration and assimilation that Americans are debating, she noted.

“We have to decide how to develop a pluralistic model of society,” she said. “How do we deal with the question of undocumented migrants? How do we integrate children within the education system?”

Corcoran is planning a book based on the lectures she gave in her course “Ireland in Transition: From Emigration to Immigration.”

Over the years, Corcoran had taught Saint Mary’s students who spent their semester abroad at Maynooth.

“I never realized the connection with my great-aunt,” she said.

Before they returned to Ireland and home, Corcoran and her children left flowers on the grave of Marianne O’Dwyer — Sister Columbina — in Our Lady of Peace Cemetery on the Saint Mary’s campus.

“It was a very moving moment emotionally,” Corcoran said. “I know no one in my family had ever visited that grave.”

Originally published by Carol C. Bradley at newsinfo.nd.edu on January 21, 2008.