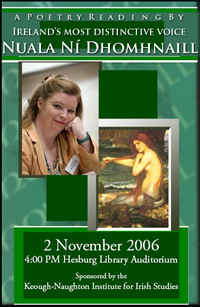 The Irish poet Nuala N Dhomhnaill, Naughton Fellow and Distinguished Visiting Professor of Irish Poetry at the University of Notre Dame, will read from her work at 4p.m. Thursday (Nov. 2) in the Hesburgh Library’s Carey Auditorium on campus.

Among the most popular of the contemporary Irish poets, N Dhomhnaill writes in the Irish language. Her work draws upon themes of ancient Irish folklore and mythology, combined with contemporary themes of femininity, sexuality and culture. Her poetry has been translated into many different languages including English, French, German, Italian, Polish, Norwegian, Estonian, Danish, Czech, Armenian, Breton, Swedish and Japanese.

A native of Lancashire, England, born in 1952 to Irish physicians, N Dhomhnaill was sent to live with relatives in the Irish speaking areas of Counties Kerry and Tipperary at the age of 5. She studied English and Irish at University College Cork in the 1960s and in 1973 married Turkish geologist Dogan Leflef. She lived in Turkey and Holland for the next seven years, returning to Kerry in 1980, and published her first collection of poetry in Irish, “An Dealg Droighin,” the following year.

Contact: _Sean O’Brien, program coordinator at the Keough-Naughton Institute for Irish Studies at 574.631.6250 or sobrien1@nd.edu
_

Originally published by Michael O. Garvey at newsinfo.nd.edu on October 31, 2006.