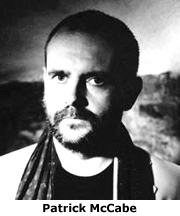 Irish novelist Patrick McCabe will give a reading at 7p.m. Thursday (March 29) ^ ^ in the University of Notre Dame’s McKenna Hall auditorium.

A native of Clones, County Monaghan, McCabe is the author of “The Butcher Boy” and “Breakfast on Pluto,” both of which have been made into popular films. He also is the author of “The Dead School,” the recently published “Winterwood,” numerous short stories, radio plays and a children’s book.

McCabe, who calls his style of writing “bog gothic,” has received numerous literary awards and was shortlisted for the prestigious Booker Prize for Fiction in 1992 and 1998. A recent review in the Wall Street Journal described him as “the lodestone of new Irish fiction, a writer capable of integrating the history and traditions of his country and its literature with the mad whirl of politics and pop culture.”

The reading is being sponsored by the Keough-Naughton Institute for Irish Studies and the Notre Dame Creative Writing Program.

Originally published by Michael O. Garvey at newsinfo.nd.edu on March 27, 2007.