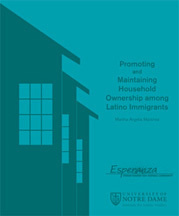 There is a cautiously optimistic view of homeownership prospects for Latino immigrants in the United States, according to a report released this month by the University of Notre Dame’s Institute for Latino Studies (ILS) and the nonprofit organization Esperanza.

The third in a 10-year study series, the report, titled “Promoting and Maintaining Household Ownership Among Latino Immigrants,” finds that examples of safe and fair mortgage lending programs that are responsive to the needs of immigrant Hispanic homebuyers do exist, but need to be better publicized and adopted by major mortgage lenders.

The study finds that between 1995 and 2005, the number of Hispanic owner-occupied homes increased by 81 percent, accounting for one quarter of the total increase in owner-occupied homes nationwide. Despite these impressive gains, Hispanic homeownership rates are far lower than for all groups.

Mortgage lenders that accept individual taxpayer identification numbers and the Matrcula Consular (identification cards offered by the governments of Mexico and other nations) have had very low foreclosure rates and have enabled many immigrants, without conventional forms of identification or experience in the U.S. banking system, to become homeowners. These and other practices geared toward the needs of non-traditional Hispanic homebuyers are used by a small, but growing number of lenders across the country and should become part of the mainstream mortgage industry, according to the report.

Other key findings include:

ILS publications are available on the Web at http://www.nd.edu/~latino/research/publications.htm

Esperanza is a faith-based organization committed to raising awareness and identifying resources that strengthen the Hispanic community.