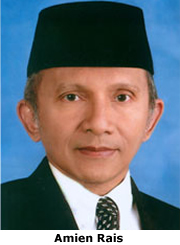 Amien Rais, a prominent Indonesian politician who led and inspired the reform movement that forced the resignation of the nation’s authoritarian ruler Suharto, will present a lecture at 3p.m. Feb. 12 (Monday) at the University of Notre Dame’s Hesburgh Center auditorium.

Rais, who earned his master’s degree from Notre Dame, was the leader of the 25-million member Islamic organization Muhammadiyah from 1995 to 2000 and chair of the People’s Consultative Assembly of Indonesia from 1999 to 2004.

Rais’ rise to power came in the wake of massive protests in Jakarta in 1998 that forced the resignation of President Suharto and led to the formation of the reformist National Mandate Party (Partai Amanat Nasional/PAN). As speaker of the People’s Consultative Assembly, Rais helped enact constitutional reforms that revived and amended Indonesia’s democratic 1945 constitution.

Rais and others worked to successfully elect Abdurrahman Wahid as president and Megawati Sukarnoputri as vice president in 1999. In the 2004 presidential election, Rais and Siswono Judohusodo earned 15 percent of the vote.

Rais currently is chair of PAN’s advisory board and a professor at Gadjah Mada University. He earned his master’s degree from Notre Dame in government and international studies, and his doctorate in political science from the University of Chicago.