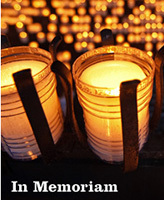 William G. Storey, professor emeritus of theology at the University of Notre Dame, died January 16 after a brief illness. He was 90.

A native of Sarnia, Ontario, Canada, Storey studied philosophy at the University of Western Ontario, earning undergraduate and master’s degrees there before enrolling at Notre Dame, where he studied in the Medieval Institute and earned master’s and doctoral degrees in 1954 and 1959, respectively. For 12 years before he joined the Notre Dame faculty in 1967, he taught at Duquesne University, chairing its history department and teaching courses in liturgy and church history.

In his first years in Notre Dame’s College of Arts and Letters, Storey taught in the then-newly founded doctoral program in liturgical studies and designed the undergraduate program for theology majors. In addition to directing doctoral students in liturgy and theology, he taught popular and often overflowing undergraduate courses on classical writings of Western Christian mystics. His brilliance as a teacher was formally recognized in 1972, when he received the College’s Sheedy Excellence in Teaching Award. Even after his retirement in 1985, Storey continued to direct doctoral students in liturgy for the next three years.

In 1980, with his partner, Philip Schatz, Storey purchased a large collection of used books and opened Erasmus Books, an eclectic bookstore in their home, a prairie-style house on East Wayne Street in South Bend, which soon became both an indispensable resource and a favorite gathering place for his former students and colleagues. One of them, Charles K. Wilber, professor emeritus of economics at Notre Dame, said, “I first met Bill 38 years ago when we were both teaching at Notre Dame, but I got to know him much better after he retired and opened Erasmus Books. He was a warm, loving person who happily answered all my questions from his treasure chest of knowledge on liturgy and prayer.”

In retirement, Storey composed, edited, and and published several popular books of prayers, and before he died he asked his surviving family and friends to pray for the repose of his soul, suggesting, “They may like to use this prayer: ‘Heavenly Father, by the precious blood shed by your only Son on the cross of Cavalry for our salvation, and by the prayers of the great Mother of God, Mary most holy, and of all the saints gone before us, please forgive the sins of Bill Storey, committed by his own fault, in his thoughts and in his words, and by what he failed to do. We ask this through Christ our Lord.’”