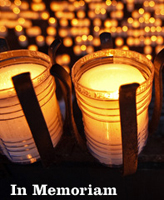 C. Lincoln Johnson, associate professor of sociology emeritus at the University of Notre Dame, died March 1. He was 70 years old.

A specialist in statistical methods and social psychology, Johnson was particularly interested in the effects of globalization on the world’s food supply. In addition to teaching a popular course on that subject, Global Food Systems: the Sociology of Food, he served for 14 years as director of Notre Dame’s Laboratory for Social Research and directed a computer applications program for the College of Arts and Letters.

“I have a wide range of interests,” he once said, “but each area of study usually comes down to focusing on that interesting intersection between self and society: How one understands a sense of self in a rapidly changing world, and how the social structure tends to shape and mold the ways we think and act.”

Among the ways Johnson was active in the South Bend community were his efforts for those in need, his service on the board of the Northeast Neighborhood Center Food Pantry, and his guest ministry at St. Peter’s United Church of Christ, Clay United Methodist Church and Sunnyside Presbyterian Church.
Contributions in Johnson’s memory may be sent to the Center for Social Concerns, Relief for World Hunger, Geddes Hall, Notre Dame, IN 46556.