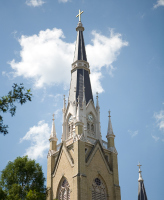 Joseph X. Brennan, professor emeritus of English at the University of Notre Dame, died at his home in South Bend on Oct. 25. He was 86 years old.

A native of Providence, R.I., Brennan was graduated from Providence College in 1945, earned a master’s degree in English from Brown University in 1949 and a doctoral degree from the University of Illinois in 1953. Before joining the Notre Dame faculty in 1955, he was a Fulbright scholar and did post-doctoral work at the Universita degli Studi in Florence and the University of Gottingen in Germany. He retired in 1993.

A soft-spoken teacher of American literature, Brennan gently proffered his erudition and earned the affection of generations of Notre Dame students, among them, Notre Dame’s emeritus president Rev. Edward A. Malloy, C.S.C. In his autobiography, “Monk’s Tale,” Father Malloy recounts his undergraduate days as a Notre Dame English major and the two courses he took from Professor Brennan, whom he describes as “one of the most articulate people I have ever met.”

A funeral Mass was celebrated Monday (November 1) in Notre Dame’s Basilica of the Sacred Heart.