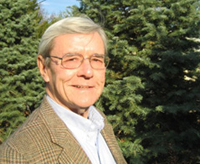 James H. Walton, professor emeritus of English at the University of Notre Dame, died Saturday after a brief illness. He was 74 years old.

A native of Blue Island, Ill., Walton was graduated from Notre Dame in 1959 and earned master’s and doctoral degrees in English from Northwestern University in 1960 and 1963, respectively.

He joined the Notre Dame faculty in 1963, teaching popular courses on the English novel and 18th-century literature until his retirement in 2003. A few years earlier, he had jokingly summarized his career at Notre Dame with what he called “painful brevity: I’ve taught British fiction from Defoe to Joyce for 25 years without once being solicited by ‘Who’s Who.’”

But both before and after his retirement, Walton was a prolific writer of literary criticism and fiction.

“From his earliest days on the English faculty, Jay had marvelous range,” says Donald Sniegowski, professor emeritus of English, adding that Walton, a devoted Chicago White Sox fan, would appreciate the baseball metaphor. “His major publications included an edition of eighteenth-century correspondence, a novel, Margaret’s Story, and a critical study of J. S. Le Fanu. He edited a wonderful anthology of poetry by Notre Dame poets and published numerous scholarly articles. With characteristic wit and self-deprecation, he tried to hide his light under a bushel, but quite a few of us knew differently.”

“Jay’s contributions to this department are legendary, but the chief one was, and remains, his friendship,” says Valerie Sayers, professor and chair of the Department of English at Notre Dame. “Our best students, undergraduate and graduate, revered him as much for his acerbic bons mots as for his personal generosity.”

Walton is survived by his wife, Carole; a daughter, Ann Caroline Walton, of Worcester, N.Y.; a son, Jack, of South Bend; and four grandchildren.

A funeral service will be held at 6 p.m. Wednesday (April 11) at Welsheimer Family Funeral Home North (17033 Cleveland Rd., South Bend). Friends may visit with the family at the funeral home from 3 p.m. until the service. A private burial will take place at Cedar Grove Cemetery.

In lieu of flowers, the family has asked that contributions may be made to the Community Foundation of St. Joseph County or The Center for Hospice Care.