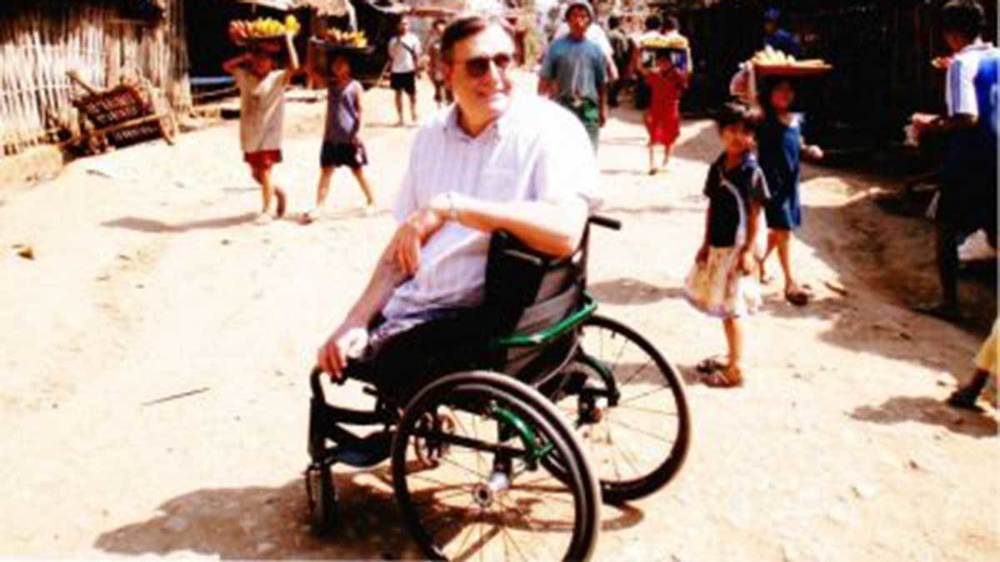 The suicide bomber drove around Baghdad’s Canal Hotel several times on the afternoon of Aug. 19, 2003, before finding a spot for his truck directly beneath the third-floor office of United Nations envoy to Iraq Sergio Vieira de Mello. The terrorist then detonated his deadly device, killing 22, including Vieira de Mello and everyone else in that third-floor office except one — Gilburt Loescher, a longtime political scientist from the University of Notre Dame and an international expert on refugee and humanitarian issues.

Loescher died April 28 of heart failure. He was 75.

Loescher had arrived in Baghdad the afternoon of Aug. 19. He and colleague Arthur Helton from the Council on Foreign Relations met with U.S. Ambassador Paul Brenner at his office in Saddam Hussein’s former palace, then traveled to U.N. headquarters at the Canal Hotel. The bomb exploded minutes after Loescher and Helton arrived.

Loescher was among the more than 150 people injured in the attack, his wounds life-threatening, with doctors giving him only a 25 percent chance of survival. It took rescuers more than four hours to extract him from the rubble — amputating his legs in the process — and later told him the only reason he didn’t bleed to death was because he was trapped upside down.

In a first-person essay for the spring 2004 issue of Notre Dame Magazine, Loescher wrote: “I was the only survivor in the most devastated part of the building. I lost both my legs above the knees, severely damaged my right hand and suffered numerous shrapnel wounds. I am incredibly lucky to still be alive.”

After several surgical procedures, Loescher made a remarkably fast recovery, leaving the hospital Oct. 31. Since then, he had dedicated himself to continuing his life’s work. As he put it in the Notre Dame Magazine story:

“This tragic event has given me greater strength and a renewed sense of commitment to continue studying and reporting on the issues that mattered so much to Arthur Helton, Sergio Vieira de Mello and to all those others who died that day while working to ensure the survival of humanitarian norms.”

Raised in the San Francisco Bay area, the 6-foot-8 Loescher was a scholarship basketball player at St. Mary’s College of California in Moraga, California. He earned his bachelor’s degree in 1967, a master’s degree from the Monterey Institute of International Studies two years later and a doctoral degree from the London School of Economics in 1975, the same year he joined the Notre Dame political science faculty. He taught international relations and peace studies and was a fellow of the Kroc Institute for International Peace Studies for 25 years.

After retiring from the University, he went on to serve with the European Council on Refugees and Exiles, International Institute for Strategic Studies and Open Democracy. He had been a visiting fellow at the Refugee Studies Centre at the University of Oxford since 2003.

The author of numerous books, his most recent, A Very Short Introduction to Refugees, from Oxford University Press, was in its final edit at the time of his death.

Peri Arnold, a longtime colleague in Notre Dame’s political science department, said Loescher had two attributes that especially stood out for him.

“What I’d stress about his career is that, first, he was committed to being in the field — in refugee camps, among migrants,” Arnold said. “It was that passion for the field experience that took him to Baghdad in 2003. Second, I’d stress he was a dedicated teacher for those who would become the next generation of refugee scholars and advocates. In that respect, the Oxford Centre for Refugee Studies was a perfect place for him to finish his career.”

Robert Johansen, a professor emeritus of political science and peace studies and Kroc Institute senior fellow, added: “Gil was a towering figure, physically, professionally and also spiritually. Yet he was kind and even gentle. He was filled with compassion, which he expressed to all, from top U.N. officials to beginning students or faculty members, regardless of origin.

“His undying commitment to scholarship on behalf of those forced out of home and often out of country was always an inspiration to his students and colleagues. Through concerned scholarship and compassionate teaching, he profoundly inspired many of the Kroc Institute’s first graduate students in peace studies. Many have testified that his influence has continued to inspire them throughout their lives since leaving Notre Dame.

“His work goes on, so each of us who knew him also knows there is something that we can do to honor him by helping those for whom he so eloquently spoke and acted.”

Notre Dame presented Loescher with an honorary doctor of laws degree at the 2006 University Commencement Ceremony.

His daughter Margaret was the director of a 2005 film about her father, “Pulled from the Rubble.”

Loescher is survived by his wife, Ann, and daughters Margaret and Clare. The family’s online tribute to him is here.