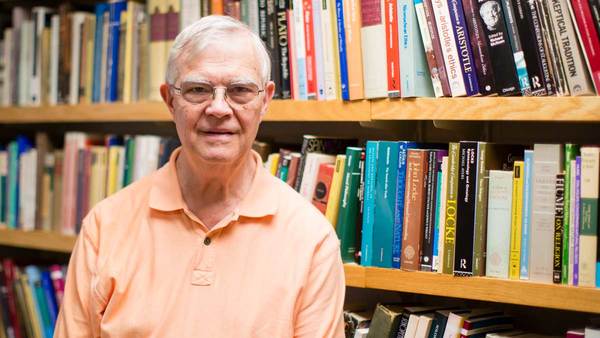 Gutting — an expert on contemporary French philosophy, philosophy of religion and philosophy of science — was a member of the Notre Dame philosophy faculty for 50 years. His teaching earned a Kaneb Award and a Thomas P. Madden Award, and he served the Department of Philosophy as chair for six years. Gutting taught University President Rev. John I. Jenkins, C.S.C., as an undergraduate student, and later served as department chair when Father Jenkins received tenure.

Gutting earned his doctorate in 1968 from Saint Louis University. He was the author or editor of more than 15 books and dozens of scholarly articles, and for many years was the editor of American Philosophical Quarterly. A leading authority on 20th-century French philosopher Michel Foucault, Gutting worked to articulate and bridge the divide between the analytic and continental philosophical traditions.

“As an author, Gary functioned as both innovator and instructor, as someone who saw philosophical interest and power where others do not,” said Notre Dame’s Paul Weithman, Glynn Family Honors Professor of Philosophy. “As a teacher, his willingness to build his lectures around the questions his students submitted by email gave them a remarkable amount of responsibility for their own education, and represented student-centered learning at its best.”

Gutting’s service to the philosophy profession found its broadest expression in Notre Dame Philosophical Reviews, which he co-founded in 2002 with his wife and co-editor, Stacie, who survives him. This publication is now the leading source for timely and penetrating reviews of new philosophy books, and is one of Notre Dame’s most-visited websites.

Gutting was committed to engaging philosophical problems and the challenges of higher education in public fora and served as a regular contributor to the New York Times’ philosophical forum, The Stone. He was an intellectual in the broadest sense. In the weeks prior to his death, Gutting’s articles in popular publications asked whether robots can have feelings, unpacked arguments on affirmative action in college admissions and discussed Foucault’s view of power.

In an interview with 3:AM, Gutting was asked how he became a philosopher, to which he replied: “My first philosophical thought — when I was ten or eleven — was that, if you gave a reason for some claim, someone could still ask for a reason for your reason — an infinite regress, as I would later learn it was called.”

A funeral Mass is planned for 3:30 p.m. Feb. 1 (Friday) at the Basilica of the Sacred Heart. Father Jenkins will preside.