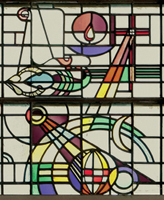 Frederick S. Beckman, professor emeritus of art, art history, and design at the University of Notre Dame, died Sunday, October 31, 2010 at his home in South Bend. He was 93 years old.

A native of Cadillac, Mich., Beckman was graduated from Notre Dame in 1942, served three years in the U.S. Army Air Corps, and earned a master’s of fine arts degree from Columbia University in 1949.

He joined Notre Dame’s art faculty in 1946, serving for many years as chairman of his department and developing and directing its industrial and graphic design programs.

An enthusiast of art and design from his earliest youth, Beckman was attracted to and influenced by the eclectic design style of the Art Deco movement of the first decades of the last century. In the classroom and studio, both before and after his retirement from teaching, his career concentrated on two- and three-dimensional corporate design and its relationship to sculpture. He enjoyed teaching, kept in touch with many of his former students, and delighted in the progress of their careers.

A memorial Mass will be celebrated in the chapel of Notre Dame’s Ryan Hall at 11 a.m. Thursday (November 4), followed by a reception at the Morris Inn.

In lieu of flowers, memorial contributions may be made to the Frederick Beckman Memorial Fund; c/o Carol Hennion; Office of Development; 1100 Grace Hall; Notre Dame, IN 46556.