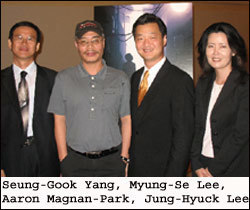 A warm “Hwanyoung” (welcome) to Korean studies, which, this fall, became the 14th language program offered at the University of Notre Dame.

And, considering that more Notre Dame students arrive from South Korea than from any other country in the world, many on campus are cheering the program’s arrival.

The number of Notre Dame undergraduate students from South Korea has increased from nine in 2002 to 86 this year. And, the pressing need for Korean instruction became apparent last year when Korean-American Janet Han, now a senior, organized on her own initiative two levels of independent Korean language instruction on Saturday mornings. Of some 50 students who expressed interest, 25 actually “enrolled” and studied on-line during the week and were taught on the weekends by native Korean speakers recruited by Han.

“Most Korean-Americans know how to speak and understand Korean because of our parents,” Han said. “We are all taught the alphabet, but we rarely learn how to write it, so our grammar structure and spelling are somewhat of a mess. I am ecstatic that the Korean studies program has begun at Notre Dame.”

Jung-Hyuck Lee, most recently acting director of Korean Studies at the University of Chicago, has joined Notre Dame’s East Asian languages and cultures faculty and this fall is teaching First Year Korean I. She is joined by Seung-Gook Yang, who is visiting for two years from Seoul National University, one of the world’s leading centers of Korean study. Yang currently is teaching Introduction to Korea and Korean Culture and in the spring will offer Modern Korean Literature Drama in Translation.

Designed for students who have not yet studied Korean language or culture, the courses introduce the fundamentals of modern Korea, as well as natural environment, history, religion, family relations, thought, literature and arts. Students will gain a greater appreciation and knowledge of Korean culture and literature through these courses, allowing them to engage in more advanced, in-depth study in subsequent semesters.

Yang feels Korea often is grossly misunderstood and hopes to counteract the legacy of incomprehension by examining the real Korea.

“It has been an independent kingdom for much of its millennia-long history, and has maintained a homogeneous culture with an exceptional continuity,” Yang said. “However, it has often been assumed that Korea’s culture and tradition are merely pale imitations of those of China and Japan. But, definitely, Korea is not and was not a mere off-shoot of China, nor is it a clone of Japan.”

Yang’s appointment at Notre Dame is a result of the University’s collaboration with the Daesan Foundation. Lionel Jensen, associate professor and former chair of East Asian languages and cultures, several years ago proposed the idea of teaching Korean. And, in the wake of a 2006 visit to Asia with Notre Dame’s president, Rev. John I. Jenkins, C.S.C., former Arts and Letters dean Mark W. Roche met with the Daesan Foundation to initiate formal discussions.

Aaron Han Joon Magnan-Park, an assistant professor of film, television and theatre who regularly teaches Contemporary Korean Cinema, has played an active role in nurturing the University’s relationship with the foundation.

“We wanted to create a sound basis for a cooperative venture to introduce, nurture, sustain and develop a world-class Korean studies program of distinction,” Magnan-Park said.

Magnan-Park is helping the College of Arts and Letters organize a Nov. 5 screening of “Crossing the Line,” a documentary about U.S. soldiers who defected to North Korea in the 1970s, and a question-and-answer session with producer Nicholas Bonner, as well as a Nov. 20 presentation titled “Production Style in Korean Television: Melodramas as Social Communication” by Heo Chul from Korea University.

Committed to building on the momentum, Notre Dame’s Office of Undergraduate Admissions recently increased its recruiting efforts in South Korea. Beginning this month, representatives each year will visit some of the most competitive high schools in Seoul, as well as host an information night open to all students, their parents and alumni in South Korea.

For those on campus, Notre Dame’s Kellogg Institute for International Studies recently hosted a ceremony to officially launch Korean studies and welcome its new faculty. The event featured a question-and-answer session with award-winning South Korean film director Myung-Se Lee and screenings of his films “Duelist” and “M”; remarks by Sung-Hwan Son, consul general of the Republic of Korea in Chicago and a strong supporter of Korean studies at Notre Dame; as well as comments by John T. McGreevy, I.A. O’Shaughnessy Dean of the College of Arts and Letters.

“I see language acquisition as central to our Catholic identity in a more global situation,” McGreevy said, “and as part of the world’s largest global institution Roman Catholicism.”