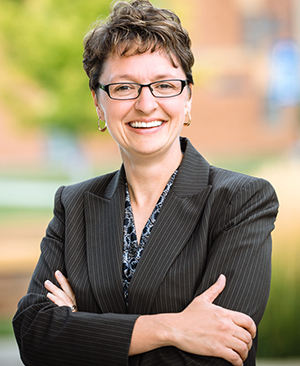 After marrying her college sweetheart when she graduated from Notre Dame in 1993, Amy Novak and her husband moved nine times, landing everywhere from Dayton, Ohio to Ottawa, Canada.

No matter what city they called home, Novak was able to find challenging and fulfilling work to support her growing family. Novak majored in history in Notre Dame’s College of Arts and Letters, and she knew how to convey to employers what skills she gained as a liberal arts graduate and how she could use those skills to enhance an organization—whether it was in higher education or the technology industry.

“In the end, it’s how you’re willing to take risks,” said Novak, 42. “And how you’re able to articulate your knowledge.”

Lessons From the Past

When Novak and her family finally settled in Mitchell, South Dakota in 2003, she cold-called Dakota Wesleyan University (DWU), asking for a job.

They had an opening for a director of a government grant, and Novak was hired for the position. Within seven months, she was able to secure more than $1 million in additional grant money for low-income, first-generation students. From there, Novak quickly moved up the ranks.

In June 2013, she was installed as the university’s first female president.

As the head of DWU, Novak creates a strategic vision, builds community partnerships, and strives to acquire resources to strengthen her institution—utilizing skills she honed in seminar classes at Notre Dame.

“I feel very comfortable researching and delving into problems, trying to come up with creative solutions,” Novak said. “I often draw on my history degree when I speak, because I think there are lessons from our past that can inform our future.”

She also strives to find new ways for higher education to serve the community. The school has about 900 students, and the city of Mitchell has approximately 14,000 residents.

“I spend a considerable amount of time meeting with business leaders, non-profit leaders and leaders in healthcare, to find ways that higher education can be of value in a more sophisticated way for business and industry,” Novak said.

One of the greatest gifts the College of Arts and Letters gave her, she said, was a foundation of broad knowledge that allows her to find common ground with people and discuss a wide range of topics—from the economy to King Lear to the Civil War.

At Notre Dame, Novak did not decide to major in history until her junior year, after trying classes in political science and economics.

“It’s OK to take a variety of courses so you can become fluent in multiple disciplines,” she said. “From that you develop an ability to learn all sorts of new and different things, because that’s what you had during a very formative time of your life.”

Guiding the Next Generation 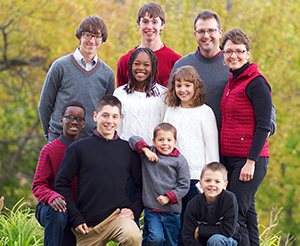 Amy Novak and her family

When Novak speaks with DWU students, she emphasizes the value of a liberal arts education by describing her own undergraduate experience. She reminds them that studies consistently show that the top companies look for communication, problem-solving, and critical thinking skills.

“I work hard to make the case for the value of the humanities and why courses in Shakespeare, history, or anthropology are so vital to our students’ future as community leaders,” she said.

So, too, is their faith, Novak said. As she navigated continuous transitions between new cities as a young professional, she stayed aware of something larger than herself.

“One of the best gifts Notre Dame gave me was a deeper appreciation for the role of God in my life,” she said. “You have to draw on something in order to be positive and motivated to apply your skills in a variety of settings. And I feel having a deep spiritual life really prepares you to open yourself up to risks.”