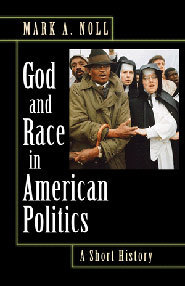 Mark Noll, Francis A. McAnaney Professor of History at the University of Notre Dame, is the author of a new book that traces the explosive political effects when religion and race intermingle.

In “God and Race in American Politics: A Short History,” released last month by Princeton University Press, Noll demonstrates how supporters and opponents of slavery and segregation drew equally on the Bible to justify the morality of their positions. He shows how a common evangelical heritage supported Jim Crow discrimination and contributed powerfully to the black theology of liberation preached by Martin Luther King Jr. In probing such connections, Noll takes readers from the 1830 slave revolt of Nat Turner through Reconstruction and the long Jim Crow era, from the civil rights movement of the 1950s and 1960s to “values” voting in recent presidential elections.

Noll argues that the greatest transformations in American political history, from the Civil War through the civil rights revolution and beyond, constitute an interconnected narrative in which opposing appeals to Biblical truth gave rise to often contradictory religious and moral complexities. And, he shows how this heritage remains alive today in controversies surrounding stem-cell research and abortion, as well as civil rights reform.

According to a review by Paul Harvey in Christianity Today, “Noll has produced yet another admirable synthesis of a huge body of American history and historiography… Thoughtful Christian readers will find this work indispensable in understanding the big picture of race, religion and politics in American history.”

Appointed to the Notre Dame faculty in 2006, Noll is one of the nation’s foremost scholars of religious and cultural history and is a prominent participant in dialogues between evangelical and Catholic scholars. Selected in 2005 by Time magazine as one of the 25 most influential evangelicals in America, Noll is the co-author (with James Turner) of “The Future of Christian Learning: An Evangelical and Catholic Dialogue” and author of numerous books, including “The Scandal of the Evangelical Mind”; “The Rise of Evangelicalism: The Age of Edwards, Whitfield, and the Wesleys”; “America’s God: From Jonathan Edwards to Abraham Lincoln”; and “The Civil War as a Theological Crisis.”