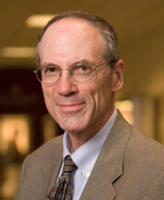 Mark A. Noll, the Francis A. McAnaney Professor of History at the University of Notre Dame, and his co-writer Carolyn Nystrom, a Chicago-based freelance writer, have won the 2012 John Pollock Award for Christian Biography for their book, Clouds of Witnesses: Christian Voices from Asia and Africa.

Presented by the Beeson Divinity School at Samford University, the Pollock Award is named for Christian biographer John C. Pollock, who wrote about religious figures such as Billy Graham, John Newton, Hudson Taylor, and William Wilberforce.

Noll and Nystrom’s book explores the lives of 17 Christian leaders from Asia and Africa. Profiles include Ugandan martyr Janani Luwum, Indian mystic Sundar Singh, and Ignatius Cardinal Kung of China. Noll says the book was born out of his teaching experiences, first at Wheaton College, and now in Notre Dame’s College of Arts and Letters.

“I have taught a course on the recent world history of Christianity for several years,” he says, “and had often wondered how to move from the big picture—filled with statistics about the shift of Christian homelands to the global south—to something more meaningful on a personal level. Biographical sketches seemed to be a good way to accomplish that goal.

“The intrigue was that each person was unique, but together they illuminated more clearly what it meant for the Christian faith to become a genuinely world religion.”

A member of the American Academy of Arts and Sciences, Noll focuses much of his research on the history of Christianity in the United States and abroad. He teaches courses in the Civil War era and Canadian history and is currently working on a general history of the public use of scripture in America, with the tentative title, The Religion of Protestants and the Ambiguous History of America as a Bible Civilization.

Noll and Nystrom will be presented with the award at Beeson Divinity School in early April in conjunction with the school’s World Christianity Focus Week.

“I have long admired the biographical labors of John Pollock,” Noll says, “so it is a special honor to be linked with his name.”