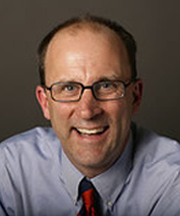 John T. McGreevy, departmental chair and professor of history at the University of Notre Dame, has been appointed I.A. O’Shaughnessy Dean of the College of Arts and Letters by Notre Dame’s president, Rev. John I. Jenkins, C.S.C., effective July 1. He succeeds Mark Roche, who is stepping down after 11 years as dean.

“Since returning to his alma mater a decade ago, John has been a valued voice on our campus, throughout higher education and in the Church,” Father Jenkins said. “He is held in the highest regard as a scholar and colleague here at Notre Dame and in the academy, and I am delighted that he has accepted our offer to lead Notre Dame’s largest and oldest college.”

McGreevy joined the Notre Dame faculty in 1997 after serving at Harvard University as the Dunwalke Associate Professor of American History and History and Literature. He has been chair of the Department of History at Notre Dame since 2002.

“John McGreevy is a talented and recognized scholar, gifted and award-winning teacher, and proven leader,” said Notre Dame Provost Thomas G. Burish. “He has an exceptional understanding of and commitment to achieving even greater academic excellence while also strengthening the distinctive Catholic identity and character of Notre Dame, and he is able to articulate this dual mission in clear and compelling terms. We are grateful and fortunate that he has agreed to serve as the next dean of the College of Arts and Letters.”

“I’m delighted to accept the position of dean of the College of Arts and Letters,” McGreevy said. “Notre Dame’s effort to at once become a preeminent research university, enhance an already strong reputation in undergraduate education and nurture a distinct religious identity is one of the most important experiments in American higher education, and I look forward to assisting this project from a new vantage point. I know firsthand that I’ll be working with a remarkable group of scholars and administrators in the college and across the university, and I’m eager to begin collaborating with them on projects that advance our common efforts.”

McGreevy is the author of two books. His first, “Parish Boundaries: The Catholic Encounter with Race in the Twentieth Century Urban North,” was published in 1996 by University of Chicago Press and was awarded the John Gilmary Shea Prize for best book on Catholic history from the American Catholic Historical Association.

The second, titled “Catholicism and American Freedom: A History,” was published by W.W. Norton in 2003. It examines tensions and overlap between an American liberal tradition focused on individual autonomy and a more communal Catholicism. Washington Post syndicated columnist E.J. Dionne praised “Catholicism and American Freedom” as a “masterpiece that will be read eagerly not only for its insights into Catholic history but also for its rich understanding of American history.” The New York Times wrote that it is a “brilliant book, which brings historical analysis of religion in American culture to a new level of insight and importance.”

Most recently, McGreevy has examined the intersection of religion and politics in the United States since the 1960s, and he also is studying 19th century Jesuits and what they can reveal about religious controversy, the “Catholic revival” and the trans-Atlantic dimensions of American religion.

McGreevy has received fellowships from the American Council of Learned Societies, the Erasmus Institute at Notre Dame and the Louisville Institute, and he has published articles in scholarly journals, newspapers such as the Chicago Tribune and journals of opinion such as the New Republic.

In the classroom, McGreevy also has been honored. At Harvard, where he taught courses on city and community in the United States, the Great Depression, religion in 20th century American culture, and history and literature, McGreevy received the John Clive Teaching Prize in 1994-95. He won a Kaneb Center Teaching Award in 2000 at Notre Dame, where he has taught on U.S. history from 1865 to the present, American nationalism, American political traditions, and the Department of History’s workshop course for entering majors. He has directed doctoral dissertations and has been especially committed to the history department’s senior thesis program.

McGreevy serves on the editorial boards of Notre Dame Press and the journals Religion and American Culture and Historical Reflections/Rflexions Historiques. He also has served the University for the past year on the Strategic Academic Planning Committee, a group of 15 administrators and faculty members that is evaluating transformative research proposals that will receive up to $10 million each in new funding.

“The search committee members worked tirelessly, selflessly and effectively to identify and recruit a strong field of finalists for the position,” he said. “They represented the University well, and were exceptional in every respect.”

Originally published by Dennis Brown at newsinfo.nd.edu on April 09, 2008.