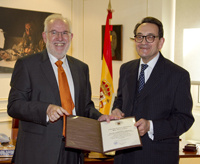 Felipe Fernández-Armesto, William P. Reynolds Professor of History at the University of Notre Dame, has been appointed the 2011 Cátedra Hispano-Británica Reina Victoria Eugenia at the Complutense University of Madrid.

Named for Queen Victoria Eugenia, the consort of Spanish King Alfonso XIII, the honor is awarded each year to a distinguished British professor in a different discipline. This year, the academic chair is in communications studies.

While Fernández-Armesto is best known as an historian, he is also an accomplished journalist whose work appears frequently in the national press in Spain and the U.K.

“I’m basing my [chair] lectures on the problem which I call ‘understanding misunderstanding,’” he says. “Why do we misunderstand each other so much? Why is it so hard to get people to grasp the message? Why in ordinary conversation do we understand each other so little? Why do international negotiations break down? Why, when people have heard the same ad or lecture or radio or television show, do they all give you different accounts of what it said?

“This is a fundamental problem,” he says, “but it’s never really been addressed as a topic of academic research.”

Fernández-Armesto, who teaches fall semesters at Notre Dame’s South Bend campus and spring semesters at the University’s London Centre, gave his first lecture in Madrid in January and will return to Spain to present additional talks during spring break and at the end of the semester.

He says the appointment holds special meaning for him because it is a part of Universidad Complutense de Madrid. “It was originally founded by Cardinal Cisneros, the early 16th century Spanish humanist and statesman,” he says, “and the very first academic paper I published was on Cardinal Cisneros, so it’s a great source of pleasure for me to go to the university he founded.”

Since that first paper, Fernández-Armesto has made his mark in a wide variety of subjects—publishing books that include 1492: The Year the World Began, Columbus on Himself, Millennium: A History of the Last 1,000 Years, So You Think You’re Human: A Brief History of Humankind, Near a Thousand Tables: A History of Food, and Ideas That Changed the World.

His research and teaching interests include Spanish history and the history of late medieval and early modern colonial societies, particularly cartography, maritime subjects, exploration, and cultural exchanges. In recent years, he has made contributions to global history, understood as the study of genuinely global experiences, and to global environmental history.

“I’m very intellectually undisciplined,” he says. “I always work on lots of different things simultaneously, like a juggler with all the balls in the air.”

Among his current projects, Fernández-Armesto has accepted a grant from a Spanish foundation to write a history of the United States from a Hispanic perspective, and he is editing the 2010 Schouler Lectures, an endowed series of talks he presented at Johns Hopkins University on the subject of 18th century slave languages in the New World.