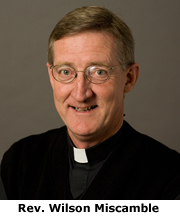 On April 23, 1945, 11 days after the death of President Franklin Delano Roosevelt, his successor, Harry S. Truman, met with Vyacheslav Mikhailovich Molotov, the foreign minister of the Soviet Union. According to one contemporary journalist, the meeting was remarkable for being the first time Molotov had ever “heard Missouri mule driver’s language.”

This grumpy encounter at the outbreak of the Cold War has become a sort of icon for those historians who discern in the departure of the New York aristocrat and the accession of the Kansas City haberdasher a sudden policy reversal in which the urbane and conciliatory diplomacy of the former gave way to the plainspoken and confrontational policy of the latter.

In his book, “From Roosevelt to Truman: Potsdam, Hiroshima, and the Cold War,” recently published by Cambridge University Press, Rev. Wilson D. Miscamble, C.S.C., associate professor of history at the University of Notre Dame, argues that while such a view “surely satisfies those who like their stories of the past served up simplistically and in the stark colors of black and white,” the origins and course of the Cold War deserve to be considered much more carefully.

“More exploration is needed to understand how successfully—if at all—Harry Truman fulfilled his commitment to continue his vaunted predecessor’s policies,” Father Miscamble writes, “and to resolve the matter as to whether Roosevelt’s death should be portrayed as representing `a turning point in American foreign policy.’”

The fruits of Father Miscamble’s subsequent reconsideration have received high praise from fellow historians among the book’s early critics.

“I know of no keener analysis of the issues involved, and no sharper portrait of the personalities who had to deal with them,” according to John Lewis Gaddis of Yale University.

“Bill Miscamble has written the definitive work on the complicated transition from Roosevelt to Truman and its impact on American foreign policy,” said Randall Woods of the University of Arkansas.

A priest of the Congregation of Holy Cross, Father Miscamble was ordained in 1988 and joined the Notre Dame faculty the same year. Most of his teaching and research concerns American foreign policy since World War II and the role of Catholics in 20th century American foreign policy. His 1992 book, “George F. Kennan and the Making of American Foreign Policy,” was the recipient of the Harry S. Truman Book Award. He also is the author of “Keeping the Faith, Making a Difference,” editor of “Go Forth and Do Good: Memorable Notre Dame Commencement Addresses” and co-editor, with John Marzalek, of “American Political History: Essays on the State of the Discipline.”

Originally published by Michael O. Garvey at newsinfo.nd.edu on November 17, 2006.