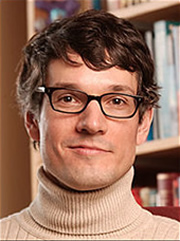 Paul Cobb appreciates the power of perspective. As a historian, it’s central to his discipline. As a historian of Christian/Muslim relations in a post-9/11 world, it’s a teaching tool he brings to class that’s as important as pen and paper.

One of the classes the Notre Dame associate professor of history teaches is a University seminar titled “Getting Crusaded” — an examination of the medieval Crusades as seen through the eyes of those who were, well, “crusaded.”

“The Crusades are a natural laboratory for appreciating historical perspective,” Cobb said. “In my seminar, we cover the `traditional’ story of the Crusades — from the perspective of Catholic Europe, and then, one by one, we attempt to reconstruct how Jews, Middle Eastern Christians, and Muslims will have understood those same events.”

Clouded by controversy for centuries, the Crusades – which were conducted from 1095 to 1291 – have been portrayed either as “holy wars” against Islam to liberate Christian holy places, or as brutal, unprovoked attacks by paranoid, religious fanatics. So which were they? That, of course, depends on one’s perspective

“The point of the course is to get freshmen — sometimes straight out of high school — to grapple with two issues central to the historical discipline: how to handle narrative and how to appreciate perspective.

“The vast majority of sources produced in the Middle Ages about the Crusades, whether by Muslims or Christians, are narratives. They are literary re-tellings of what happened, not documents as such. They reflect the attempt by an author to craft a `story’ about an event. Students are taught to pay attention to plot devices, rhetoric, character stereotypes and development, and any axes that are being ground.”

Cobb’s latest book, to be published this month, is a biography of an eyewitness to the Crusades, a medieval Muslim from Syria named Usama, whose memoirs Cobb first discovered as an undergraduate in an Arabic class. After revisiting those memoirs – which were rich with details about Usama’s family – he began writing a history of the clan.

“The memoirs were tough to understand, but very funny and moving,” Cobb said. “I subsequently learned that Usama, who was quite famous in his day as a poet and warrior, was from an aristocratic family of some notoriety in medieval Syria.”

Titled “Usama ibn Munqidh: Warrior-Poet of the Age of Crusades” (Oxford: Oneworld, 2006), the book is the first biography in English of Usama. The family castle still stands in Syria, and additional research for the book took Cobb “into all sorts of fascinating texts and strange locales in Syria, Lebanon, Jordan and Egypt.”

The work would have been daunting for some, but not for a scholar who speaks Arabic, Persian, Greek, Syriac, French, German and “enough Turkish and Italian to sweet-talk the archivists.”

In addition to the biography of Usama, Cobb’s research has spawned other projects: the family history and a new English translation of Usama’s famous memoirs for Penguin Classics titled “Islam and the Crusades: Usama ibn Munqidh and Ibn Jubayr.”

“I’m most energized by the ways in which my teaching informs my research and vice-versa,’ he says. “So on the distant, distant horizon, a book based * * on `Getting Crusaded’ may be in the works.”

Originally published by Susan Guibert at newsinfo.nd.edu on February 16, 2006.