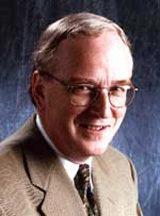 John E. Hare, Noah Porter Professor of Philosophical Theology at Yale Divinity School, will deliver the University of Notre Dame’s annual Plantinga Lecture, titled “Divine Command Theory: Some Reflections on the Contemporary Situation,” Friday (Sept. 26) at 3p.m. in the auditorium of the Eck Visitors’ Center. The presentation is free and open to the public, and a discussion and reception will follow.

In his book “God’s Call,” Hare explores Divine Command Theory, which strives to root morality in theology, alongside contemporary moral theory. His other books include “Why Bother Being Good?” in which he non-technically strives to answer questions like, “Can we be morally good?” and “Why should we be morally good?” and “The Moral Gap” in which he explains that God is needed to meet moral demands.

Hare earned his bachelor’s degree from Oxford University and his doctoral degree from Princeton University. He has worked in a teaching hospital, for the Foreign Affairs Committee of the U.S. House of Representatives, and is a published composer of church music. His areas of research include ancient philosophy, medieval Franciscan philosophy, Kant, Kierkegaard, contemporary ethical theory, the theory of atonement, medical ethics, and international relations.

Hare’s lecture is sponsored by Notre Dame’s Center for Philosophy of Religion, which offers a number of fellowships each year to allow scholars to pursue their work in the philosophy of religion and Christian philosophy. The Alvin Plantinga Fellowship in particular provides time for reflection and writing to prominent scholars in the field. This year marks the seventh annual Plantinga Lecture, which is named in honor of the renowned Notre Dame philosopher Alvin Plantinga.

Originally published by Kathleen McDonnell at newsinfo.nd.edu on September 23, 2008.