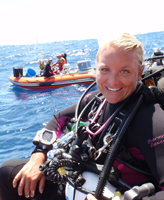 A graduate of Notre Dame’s Program of Liberal Studies, Kelly Gleason ’98 was leading a team of maritime archeologists on a research expedition some 600 miles northwest of Honolulu when they found two anchors, three trypots (used for boiling whale blubber down to oil) along with whaling implements and ship’s rigging all from the early 19th century.

After two years of follow-up research and field work, Gleason and her team from the National Ocean and Atmospheric Administration (NOAA)’s Office of National Marine Sanctuaries confirmed this year that they had discovered a gem of maritime—and literary—history: the resting place of a ship called the Two Brothers, which wrecked on a reef at French Frigate Shoals in the Northwestern Hawaiian Islands in 1823.

The ill-fated Nantucket ship was captained by George Pollard Jr., whose earlier whaling vessel, the Essex, was rammed by a whale and sunk in 1820, inspiring author Herman Melville’s novel Moby Dick.

The Two Brothers, which Gleason calls a “once-in-a-lifetime” find, is believed to be the first discovery of a wrecked whaling ship from Nantucket—once known as the whaling capital of the world.

Discovering shipwrecks and the stories behind them is the most exciting part of her work, says Gleason, an underwater archeologist for NOAA’s Office of National Marine Sanctuaries and the maritime heritage program coordinator at Papahānaumokuākea Marine National Monument, one of the largest ocean conservation areas in the world. 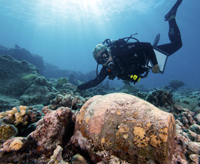 And while Notre Dame may be among the nation’s more landlocked universities, Gleason says she credits its Program of Liberal Studies (PLS) for where she is today.

“I’m constantly reminded how grateful I am that I chose to major in PLS,” she says.

The PLS major in the College of Arts and Letters explores the “great books” of Western civilization and the Catholic intellectual traditions. A series of discussion- and reading-based tutorials provides students the opportunity to delve deeply into literature, philosophy, science, theology, political theory, the fine arts, and cultural history.

In the process, students in the program acquire a broad intellectual background while honing their abilities to read texts critically, formulate articulate and thoughtful arguments, and communicate effectively.

And in effect, Gleason says, “PLS gives you the tools to do anything you want to do.”

A Leap of Faith 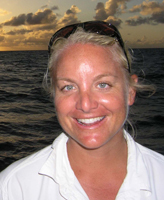 It was during a PLS retreat her senior year that she decided to follow her heart and pursue a career in marine archeology.

“We were talking about what we were going to do after college, and my classmates were discussing pursuing your dream versus doing what’s ‘practical,’” Gleason recalls. “A lot of people choose a path that’s secure and practical, which is certainly understandable and noble. But it can be easy to put off pursuing a dream, and the longer it stays a dream, the more difficult it can be to attain.

“I had this moment where I decided: I’m going to try to pursue the one thing I’ll always regret not doing.”

After graduation, Gleason went on to receive her master’s degree at the University of St. Andrews in Scotland, which offers an underwater archeology program in its department of history. She then returned to the United States and completed her doctorate at Eastern Carolina University.

While there, she obtained an internship with NOAA—a position that later turned into her full-time job.

Every day, says Gleason, she uses skills she learned in PLS, whether it’s communicating with scientists across various disciplines, doing historical research into ship logs and newspaper records to confirm that the wreck her team found in 2008 was the Two Brothers, or working with the Hawaiian and Nantucket community and the media to show the discovery’s relevance to today. 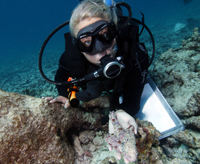 “These are much more than a collection of artifacts or things on the sea floor,” she says.

“They represent a story—a moment in time—but also these men’s livelihoods, a way of life, and a whole era of history that is a fascinating reminder of where we’ve come from; a time when we thought our ocean’s resources were infinite.”

With its ties to one of the literary classics she studied as a PLS major in the University of Notre Dame’s College of Arts and Letters, the Two Brothers shipwreck was also a reminder of how Gleason got her start.

“I don’t think I would have had the courage to pursue such an obscure career path if I hadn’t been involved in a program like the PLS, which really did encourage taking leaps of faith like that, as well as the skills to understand and interpret exciting discoveries on the seafloor like the Two Brothers.”