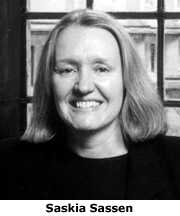 The University of Notre Dame’s Graduate School will present its first Distinguished Alumnus Award to Saskia Sassen, Ralph Lewis Professor of Sociology at the University of Chicago and Centennial Visiting Professor at the London School of Economics, at 1p.m. Saturday (May 19) during commencement ceremonies in the DeBartolo Center for the Performing Arts.

The award was established to mark the school’s first commencement ceremony and will be presented to an individual who has received a graduate degree from Notre Dame and made a difference to his or her field, community or society at large.

Born in the Netherlands, Sassen grew up in Argentina and Italy and was raised in five languages. After receiving her master’s degree from the Universit de Poitiers, she came to Notre Dame for further graduate work and earned her doctorate in sociology and economics in 1974.

Sassen is a student of cities, immigration and states in the world economy. She is recognized worldwide as one of the most important social science voices on the subject of globalization. Her particular areas of focus are international migration and global governance.

Sassen’s most recent book is “Territory, Authority, Rights: From Medieval to Global Assemblages.” She has just completed a five-year project for UNESCO on sustainable human settlement in which she set up a network of researchers and activists in more than 30 countries. The results were published as one of the volumes of the Encyclopedia of Life Support Systems.

Her other works include “Cities in a World Economy,” “A Sociology of Globalization,” “Digital Formations: New Architectures for Global Order” and “The Global City.” Her books have been translated into 16 languages.

Sassen serves on several editorial boards and is an adviser to several international bodies. She is a member of the Council on Foreign Relations, the National Academy of Sciences Panel on Cities, and serves as chair of the Information Technology and International Cooperation Committee of the Social Science Research Council.

Originally published by William G. Gilroy at newsinfo.nd.edu on May 17, 2007.