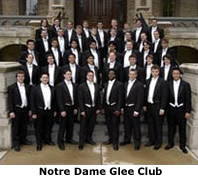 Admission to the concert, which features two of the finest all male collegiate choral groups in the country, ranges from $3 to $10, and tickets are available by calling the DeBartolo Center at 574-631-2800.

Both ensembles will perform sacred and secular classical music (including a joint performance of Franz Biebl’s “Ave Maria”), folk songs and spirituals.

Directed by Daniel Stowe, the Notre Dame Glee Club was founded in 1915 and has toured from coast to coast and around the world, performing more than 100 concerts annually. In recent years the club has performed on tour in Canada, Puerto Rico, Israel, Central America, throughout Europe, and in Asia. On campus, it is known and loved for its seasonal and Commencement concerts each year, as well as its Saturday performances before each Irish home football game.

Founded in 1859, the University of Michigan Men’s Glee Club is one of the oldest collegiate choruses in the United States and the oldest continually run student organization on the Michigan campus.