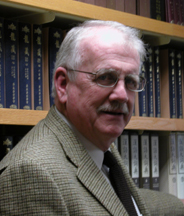 As perhaps befits a new member of the University of Notre Dame’s increasingly diverse arts and letters faculty, Robert Gimello, research professor of theology and East Asian languages and cultures, is no ordinary Buddhologist.

“It’s a term not all of us are comfortable with,” Gimello said recently when asked about the sobriquet occasionally applied to those with a professional intellectual interest in Buddhism. “Some of us tend to enclose it in quotation marks,” he added, making it clear that he was one of this disapproving set.

But then, a certain unease with academic jargon is forgivable in a scholar whose work obliges him to look long and deeply into the profound contrasts and intriguing connections between Eastern and Western religious thought and experience.

Nor is Gimello himself professionally reducible to a single category. A graduate of Seton Hall University, where he earned a master’s degree in Chinese, he also holds a doctoral degree in East Asian languages and cultures from Columbia University and was a postdoctoral fellow at the University of Tokyo.

His teaching and scholarship largely concern the history of Buddhism and particularly concern medieval and early modern Buddhist thought. In pursuit of these interests Gimello has traveled widely in Asia, frequently visiting China, Korea, Japan and India. He is the author, translator and editor of numerous essays, encyclopedia articles and books on Buddhist doctrine, mysticism, and poetry, and before arriving this fall at Notre Dame, he had spent nine years at Harvard University as a member of its East Asian languages and civilizations faculty. He also has taught at the University of Arizona, the University of California at Santa Barbara, Dartmouth and various Buddhist and secular universities in Asia and Europe. Prominent among his current projects is the completion of a book on Tantric Buddhism in China.

“We are very fortunate to have Robert Gimello join our faculty,” said John Cavadini, chair of theology. “He is among the foremost, if he isn’t himself the foremost, of the world’s scholars of Chinese Buddhism.”

Gimello teaches an undergraduate course on “The Worlds of Buddhism,” which introduces students to Buddhist tradition in several Asian countries, exploring Buddhist doctrine, practice and social, cultural, and material history. He also teaches a graduate course, “Religion And The Visual Arts, Christian And Buddhist,” which examines the role of religious icons in Buddhism and Christianity.

As might be expected of a man so well-traveled, Gimello seems to have experienced little culture shock during his transition from Harvard Yard to Golden Dome. He recently attended Mass in a dormitory and was impressed by the liturgical dignity and the apparent recollection and attentiveness of the students.

“Very often, the sorts of students drawn to study of Buddhism are somehow disaffected with Christianity,” he remarked. “They’ll speak dismissively about the rosary, with which they’re familiar, while expressing fascination with a Tibetan prayer wheel, whose use is very similar.”

If Notre Dame is not exactly renowned as a center of Buddhist scholarship, its reputation as a Catholic university had much to do with Gimello’s coming here. While he looks forward to assisting in the expansion of the presence of Asia and Asian religions in the increasingly global scope of Notre Dame’s general undergraduate and graduate curricula, he has another interest as well.

“I have for some time been interested in comparative theology and in the broader conversation between Buddhism and Christianity,” Gimello said. “And I hope to bring to that conversation some distinctly Catholic theological perspectives.”

Among Catholic theologians whose work he finds helpful for this project are the late Cardinal Henri de Lubac, who wrote several studies on Buddhism, and Hans Urs von Balthasar, who once wrote that the Catholic Church’s dialogue with Buddhism rivaled in importance its dialogue with Greek thought. De Lubac and von Balthazar were close colleagues of Cardinal Josef Ratzinger, now Pope Benedict XVI, whose remarks on Buddhism have sometimes been controversial, though often, in Gimello’s opinion, misunderstood.

After all, any scholar burdened by such an unwieldy label as “Buddhologist” knows all about being misunderstood.

Originally published by Michael O. Garvey at newsinfo.nd.edu on December 03, 2007.