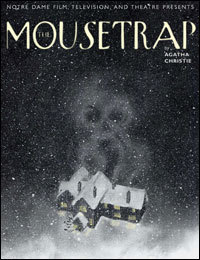 The University of Notre Dame’s Department of Film, Television and Theatre (FTT) will present Agatha Christie’s “The Mousetrap” Feb. 27 to March 4 (Tuesday to Sunday) in the Decio Mainstage Theatre of Notre Dame’s Marie P. DeBartolo Center for the Performing Arts.

Admission is $12 for the general public, $10 for senior citizens and $8 for students. Tickets and a complete schedule of performances are available at the performing arts center box office or by calling 574-631-2800 or at http://performingarts.nd.edu/index.php?page=detail&event=386 .

Directed by FTT assistant professor Jay Paul Skelton, “The Mousetrap” was commissioned in 1952 by the BBC to celebrate Queen Mary’s 80th birthday, and has become the longest continuously running play of all time. It begins on a dark and snowy evening on the outskirts of London where a young couple has just opened Monkswell Manor Guest House. An eccentric assortment of guests arrives only to learn from the local authorities that a murderer is among them.Snowed in, with no chance of escape, suspicions rise with the body count in this classic “whodunit” from the queen of mystery and suspense.