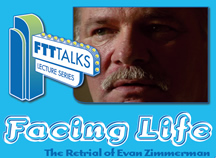 “Facing Life: The Retrial of Evan Zimmerman,” a documentary about the second trial of a self-proclaimed innocent man sentenced to life in prison for murder, will make its cinematic premiere Monday (May 8) at 7 and 10p.m. in the Browning Cinema of the DeBartolo Center for the Performing Arts at the University of Notre Dame.

Presented by Notre Dame’s Department of Film, Television and Theatre (FTT) as part of its FTT Talks lecture series, both screenings are free and open to the public and will be followed by question-and-answer sessions with the film’s producers, including Dustin Park, a 2002 FTT graduate.

“Facing Life” documents the retrial of Zimmerman, who in 2001 was convicted and received a life sentence for the murder of his former girlfriend. He spent three years in prison, then won a new trial with help from a team of law students and professors from the University of Wisconsin Innocence Project. Before the second trial began, the prosecutor in the case offered him a deal in which he could go free in exchange for pleading guilty to a lesser charge, which Zimmerman refused. His defense team prepared for the court case, which culminated in a startling conclusion and raised questions about imperfect justice and the significance of DNA in criminal prosecutions.

Originally published by Julie Hail Flory at newsinfo.nd.edu on May 03, 2006.