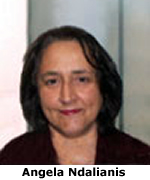 Angela Ndalianis, associate professor of cinema studies at Melbourne University in Australia, will speak at 4p.m. Wednesday (March 7) in the Browning Cinema of the DeBartolo Performing Arts Center at the University of Notre Dame.

Part of the FTT Talks Lecture Series and sponsored by the Department of Film, Television and Theatre and the Center for Creative Computing, the lecture is open to the public. There is no charge for admission, but tickets are required and can be reserved at 574-631-2800.

Ndalianis’ lecture, titled “Chasing the White Rabbit to Find a White Polar Bear: Podcasts,Mobisodes, and the TV Experience,” will explore the use of new media by television networks.

Communication technologies that were created to serve distinct audiences,such as mobile phones, podcasts and theInternet, are becoming significant adjuncts to the television entertainment experience. Ndalianis will explain how popular shows like “Lost” and “24” are offering additional media, including mobisodes (mobile episodes) and Internet games.

Part of the School of Culture and Communication faculty at Melbourne University, Ndalianis focuses her research on the neo-baroque nature of contemporaryentertainment culture, media histories and the convergence of popular media forms such as films, computer games, television, comic books andtheme parks. She is author of the book “Neo-Baroque Aesthetics and Contemporary Entertainment” and co-editor of the new compilation “Super/Heroes: from Hercules to Superman.”

Originally published by Kyle Chamberlin at newsinfo.nd.edu on March 01, 2007.