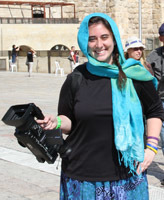 Filming a theological exploration in Jerusalem poses some particular challenges. For one thing, the city is baking hot. There are also the logistics of unfamiliar energy converters and unwieldy battery packs. Then there’s the fact that filming on holy ground engenders mixed reactions.

“It took a lot of trying to be respectful—and still capture the experience on film,” says Notre Dame senior Erin Moffitt. “People weren’t always keen on having large cameras in their faces.”

Over fall break, Moffitt and senior Nicole Timmerman, both film, television, and theatre (FTT) majors in the College of Arts and Letters, traveled with a group of undergraduate theology students to Notre Dame’s Tantur Ecumenical Institute in Jerusalem. Their mission was to create a pair of short documentaries about the experience for the Department of Theology.

A Pilgrimage on Film 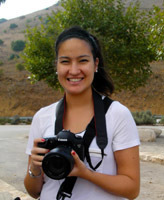 “The class wanted to run where Jesus walked—to travel through his life and where he would have gone,” Moffitt says. “We wanted to capture the natural culture there and the class experiencing it.”

The filmmakers focused on a few key themes as they worked with the students, says Timmerman, who also majors in graphic design. “How does this journey enhance their experience as students and Catholics? What is the experience of being a pilgrim in Jerusalem, seeing holy sites?”

At first, the theology students were skittish around the cameras. “When we approached them, they would think they were in the way and move away,” Moffitt says. “For the first couple days we were the people with the camera, but by the end of the week we were all friends.”

Timmerman attributes this change, in part, to the intensity of the experience. As the filmmakers and the pilgrims explored the city, they also explored the complexities of the Palestine-Israeli conflict, which proved illuminating.

“I think one of the most important parts of the experience was learning about the conflict and realizing how ingrained it is in their culture,” Timmerman says. “The theology students—and Erin and I as well—we all had this great opportunity to explore and learn about this subject and interact with other students we wouldn’t normally run into at Notre Dame.”

Both before and after the trip, Timmerman and Moffitt also worked closely with faculty and staff in the Department of Theology. “We would send them cuts, and they would send us feedback so we could edit to make sure they got what they wanted,” Moffitt says.

The project provided a great opportunity to make connections between Notre Dame and the wider world, Timmerman says. “Towards the end of the trip we went to a church in Jerusalem and the students sang the Alma Mater there and we got it on film.

“It really brought the experience together.”

A Bridge to Understanding 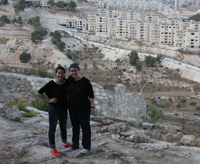 For Timmerman and Moffitt, film provides a perfect medium to process and comprehend the world. “It’s about expressing something not only through words but through visuals,” Moffitt says.

“I like exploring the world and what’s in it,” she says. “Documentary is especially fun because it appeases natural human curiosity by providing a window into something you’ve yet to see or experience.”

While the filmmakers faced some unique challenges in Jerusalem, this wasn’t the first time they’ve taken their cameras on the road. They filmed documentaries in Chicago and were part of a group that traveled to France to document the Cannes Film Festival. “We got to walk the red carpet and experience the festival culture,” Timmerman recalls.

The duo relish opportunities to test their skills outside the classroom, “It’s a whole different experience sitting in a classroom and learning theory as opposed to applying it out in the field,” Moffitt says.

“Filming in Jerusalem was sort of a culmination of what we’ve learned.”