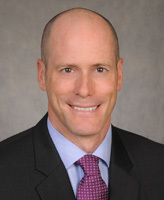 As an undergraduate economics major in the College of Arts and Letters, Bill Kennedy ’90 took an Asian history class to fulfill one of his academic requirements. That class, he says, is part of the reason he is now a top portfolio manager at Fidelity Investments in London.

“I fell in love with international business because I’d taken government requirements and then a fascinating Asian history class,” he says. “My professor got me really excited about the opportunities in Asia.

“My career grew right out of my Arts and Letters degree; I became fascinated with things that are now relevant to my career and what I do every day.”

Kennedy recently returned to the College of Arts and Letters to speak to more than 100 undergraduates interested in international finance as a potential career. Rather than talk formulas and market shares, Kennedy stressed one point: an liberal arts background can be an incredible edge in business.

Shortly after graduation, Kennedy says, he transplanted to Asia, where he lived and worked for several years. “What got me interested in investing was learning the history of the places where I wanted to invest,” he says.

His curiosity has now literally taken him around the world. “I invest in any market in the world—you name it, I’ve looked at it,” Kennedy says. “I want to understand what’s important, what’s happening around them. I spend time talking, researching, going to untraditional sources because you need to get an edge.”

In the College of Arts and Letters, he says, students can develop an edge through English courses that require them to look at different interpretations of an author’s work and dig beneath the surface text or in philosophy classes that force them to take a creative approach to understanding the world in which we live.

Recounting a personal example, Kennedy recalls a sociology class in which he was asked to conduct surveys of the student body as an exercise in reading and gauging public opinion.

“At the time I thought it was ridiculous, but I use that background all the time,” he says. “You have to look at a company differently than the thousands of other competitors. How do you peel back the onion to better understand what drives the stock?

What drives his success in the business world, says Kennedy, is having an “inquisitive nature, being able to look beyond what common consensus will tell you, the willingness to question what is widely accepted.

“Investment is conceptual; it’s about things you learn with rigorous research, and that’s the research you’re learning to do in your classes,” he says. “Talking to people, reading a lot, looking at what happened in history, that’s what I do all the time.”

Throughout his extensive travels, Kennedy says he holds on to many other lessons he learned at Notre Dame.

“What you get at Notre Dame is the sense of community; this is a special place. People build camaraderie, which is important in the business world because business is about building and nurturing relationships.”

But as valuable as the Notre Dame network is, more important is the ethical education the University provides, Kennedy says.

“We live in a world where there are lots of temptations to stray from a moral code, especially in investing. I draw back to a lot of the ethics that I learned here.”

Critical thinking, creative approaches to problems, a broad historical and cultural education, a strong sense of community and moral grounding—all of these have helped Kennedy do well. But there was one final piece of advice he offered future graduates of the College of Arts and Letters on his latest visit to campus.

“Whatever you do, you’ve got to love what you’re doing. You’ve got to have passion for it.”