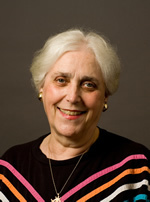 Dolores Warwick Frese, professor of English and fellow of the Medieval Institute at the University of Notre Dame, will receive the Elizabeth P. Hoisington ’40 Distinguished Alumna Award from College of Notre Dame of Maryland on Saturday (Sept. 20).

The award, named for college alumna Brig. Gen. Elizabeth P. Hoisington, one of the first two women selected as a brigadier general in the U.S. Army, is presented to a graduate who, through achievements in career and/or community service, embodies the principles of College of Notre Dame.

Frese, a medieval literature specialist and creative writer, has published widely in various genres, including novels, poetry, short stories and national and international academic journals, and has co-edited volumes of scholarly essays on Old and Middle English literature. Her book, “An Ars Legendi for Chaucer’s Canterbury Tales,” which won the Hans Rosenhaupt Award for distinguished scholarship in the humanities from the Woodrow Wilson Foundation, established her reputation as a leading Chaucerian scholar. She has received fellowships from the American Council of Learned Societies and the National Endowment for the Humanities.