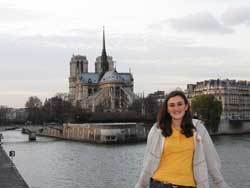 Claire Reising, a Notre Dame junior majoring in French and English, has won a 2010 Prix Du Meilleur Essai (best essay) award from Women In French (WIF), a national organization affiliated with the Modern Language Association. WIF bestows several awards to highlight the work of outstanding female researchers in French and francophone studies. Reising has been given the one annual award to undergraduate students for an essay written in French by a non-native speaker.

“With a double major in English and French, Claire Reising has enjoyed many opportunities to develop her critical thinking skills in literary analysis,” Perry says. “Her essay is excellent in every respect, showing a thoughtful and sensitive analysis of the works, remaining close to the texts, and displaying attention both to linguistic correctness and to style. I am delighted that she received such a well-deserved award from a prominent national association.”

Perry’s course, which examined Islam as represented through literature, was linked to last November’s symposium, “The Place of Islam in Contemporary European Literature.” The symposium, jointly-sponsored by the Nanovic Institute for European Studies, the Kroc Institute for International Peace Studies, the Kellogg Institute for International Studies, and the Institute for Scholarship in the Liberal Arts, brought 12 of Europe’s most prominent Muslim and Muslim-born writers to campus to discuss the place of Islam in their work. Nine of those writers came from France or French-speaking countries, and one of them, Malika Mokeddem, is the author of one of the books that Reising analyzed in her essay.

Significant excerpts of Reising’s essay, photographs, and a video link are now posted on the Notre Dame Blog, Teach this lit! Best of ND, created by Julia Douthwaite, professor of French in Department of Romance Languages and Literatures. Reising’s full essay will be posted on the Women In French website. The essay by the 2006 undergraduate award winner, Notre Dame graduate Leslie Kealhofer, is also posted there. Kealhofer is now completing a doctorate in French at the Winthrop King Institute for Contemporary French and Francophone Studies at Florida State University.