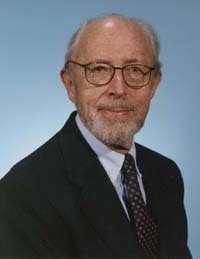 Frederick J. Crosson, John J. Cavanaugh Professor Emeritus of Humanities at the University of Notre Dame, died Dec. 9 at Hospice House in South Bend. He was 83.

A member of the Notre Dame faculty since 1953, the same year he married Mary Patricia (Burns) Crosson, who survives him, Crosson specialized in phenomenology and existentialism, but studied and taught in a much broader variety of fields.

A native of Belmar, N.J., Crosson earned his bachelor’s and master’s degrees from Catholic University of America and studied at Laval University in Quebec and at the University of Paris before receiving his doctoral degree in philosophy from Notre Dame in 1956. He directed the Program of Liberal Studies from 1964 to 1968, when he became the first lay dean of Notre Dame’s College of Arts and Letters, a position he held until 1975, when he returned to full-time teaching and scholarship. From 1976 to 1982 he served as editor of Notre Dame’s Review of Politics.

Known and loved by his colleagues for his enthusiastic collegiality and by his students for his generous availability, Crosson, a devotee of the seminar, often spoke of his delight at noticing the “eureka moment” in a student’s expression. What he most desired for his students, he once said, were “the skills of discerning and relating, of finding the order and meaning in nature and in culture. To begin to do that, to begin to be able to make for ourselves informed judgments about life and about works of literature, about politics and sociological theories, about what is worth reading and loving and doing, is to begin to free ourselves from being the prisoners of the mass media and the conventional wisdom of our time.”

In addition to his wife, Crosson is survived by his children, Dr. Jessica Crosson, of Lafayette, Calif.; Veronica Flynn of Wilmington, Mass.; Jennifer Crosson of South Bend; Christopher Crosson of Gerton, N.C.; and Benedict Crosson of Seattle; and five grandchildren.

Following a funeral Mass on Dec. 14 in the Basilica of the Sacred Heart, Crosson was buried in Notre Dame’s Cedar Grove Cemetery.

Originally published at newsinfo.nd.edu on December 18, 2009.