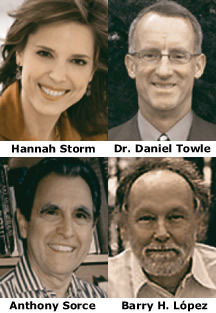 Four University of Notre Dame graduates will be honored by the Notre Dame Alumni Association during ceremonies on campus Friday (Jan. 26).

The Rev. Arthur S. Harvey, C.S.C., Award, which recognizes achievements in the media or performing arts, will be presented to Hannah Storm, a 1983 graduate and co-anchor of CBS News’ The Early Show.

Storm, a resident of Greenwich, Conn., became the first woman to serve as the solo anchor of a network sports package when she hosted NBC’s baseball and basketball programming from 1995 to 2002. Previously, she anchored “CNN Sports Tonight” and was a sports anchor and reporter in Charlotte, N.C., and Houston and Corpus Christi, Texas. She began her sports reporting career at WNDU-TV in South Bend in 1982.

Honored in 2005 with the American Women in Radio and Television Gracie Award for outstanding news anchor, Storm also is the only woman twice nominated for an Emmy Award for Best Sports Television Host. In addition, she is the author of “Notre Dame Inspirations” and “Go Girl! Raising Healthy, Confident and Successful Girls Through Sports.”

Dr. Daniel Towle, a 1977 graduate and pediatric anesthesiologist, will receive the Dr. Thomas A. Dooley Award for outstanding service to humanity.

Towle has worked with Catholic organizations for 31 years to bring medical, spiritual and emotional support to families in underdeveloped countries. He has developed, funded and participated in a variety of international programs that provide health care for the less fortunate. He has assisted in building a health clinic in a remote region of Nepal that provided maternal and child health care, participated in reconstructive surgical procedures for birth defects in Honduras and Peru, provided medical monitors and funding for under-equipped hospitals throughout Central and South America, andcared for pediatric surgical patients afflicted with burn injury deformities in Bolivia.

Most recently, Towle has formed the Touching Tiny Lives Foundation, which supports a safe home for 20 AIDS-inflicted orphans in Lesotho, Africa, cares for 75 children in surrounding villages, and is undertaking efforts to reduce mother to child transmission of the AIDS virus.

In his home town, Leawood, Kan., Towle supports home restoration efforts for the impoverished, a free health clinic and local homeless shelters. In the last 15 years he has founded and sponsored service opportunities for more than 25 Notre Dame undergraduates through the University’s Department of Anthropology and Center for Social Concerns.

The Rev. Anthony J. Lauck, C.S.C., Award, which recognizes outstanding accomplishments in the fine and visual arts, will be presented to Anthony Sorce, a painter, sculptor and 1961 Notre Dame graduate.

Prior to enrolling at the University, Sorce was awarded the Chicago Artist Guild Prize and earned a diploma from the American Academy of Art. During his time as an undergraduate and graduate student at Notre Dame, he received the Ivan Mestrovic Studio Assistantship three times.

In 1968, Sorce was one of the youngest artists to be awarded the John Simon Guggenheim Memorial Foundation Fellowship in recognition of his pioneering work and innovation in sculpture with polyurethane rigid foam. He has received the Faculty Research Award for Painting from the Research Foundation of the City University of New York six times since 1974. Sorce, who resides in New York, earned his master’s degree from Notre Dame in 1962.

Lpez, a resident of Blue River, Ore., is the recipient of the Award in Literature from the American Academy of Arts and Letters, the John Burroughs and John Hay Medals, and fellowships from the Guggenheim, Lannan, and National Science Foundations.