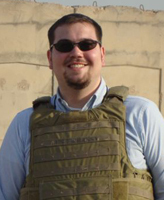 Luke McLaurin B.A. ’03 M.A. ’04 spent 14 months in Iraq, acting as a legal advisor for judges, police, attorneys, and law students as they worked to improve their criminal justice system.

While working for the U.S. Department of Justice in Baghdad, Luke McLaurin B.A. ’03 M.A. ’04 found himself returning to the same ancient texts he read while studying philosophy and Italian at Notre Dame.

At night, McLaurin recalls, he would rest in his room at the U.S. Embassy, re-visiting the classic works that helped guide him into a legal career.

“It was just a nice way to escape for me,” McLaurin says. “Reading Plato’s The Republic was interesting, thinking about issues of justice and how societies should be set up when you are living in a time when there’s a lot of upheaval around you.”

He worked in the midst of Iraq’s upheaval for 14 months, acting as a legal advisor for judges, police, attorneys, and law students as they worked to improve their criminal justice system.

McLaurin credits the classic texts of Plato, Aristotle, Dante, Shakespeare, and others for equipping him with the skills every good attorney needs: the ability to think critically and argue persuasively.

But he says studying the humanities cultivated another important trait: creativity. In his current role as an assistant U.S. Attorney in the eastern district of Tennessee, McLaurin says originality goes a long way.

“How do you take the law as it exists and make a creative argument as to how it applies in a particular situation? That’s not that dissimilar to reading the work of a great author and figuring out what that author is saying and how that is relevant in today’s world.” 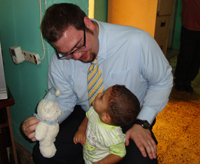 Alumnus Luke McLaurin worked to improve conditions at detention centers in Iraq. Here he visits a women’s center where children of the detainees were also kept.

McLaurin, who also loves numbers and science, never set out to be an attorney. In fact, he had originally planned to be a physicist. But his enduring interest in language and literature—and a desire to study abroad and view the world’s great art—led him to major in philosophy and Italian.

He began to consider a legal career, he says, after a summer service project in Florida, where he worked with homeless teenagers, helping them reunite with their families, if possible, and refocus on their education.

“I saw a lot of problems these kids were suffering from, and the more I thought about it and read about it and talked about it, it made me see … that it wasn’t enough to be aware of the problem. I needed to have the skills to be able to effect change in the system, and it struck me that the people who are able to effect change are folks educated in the law,” McLaurin says.

“That seed was planted through working on a Notre Dame project. I thought, ‘How can I take this passion I have for learning things and thinking about things, and translate it into something that has real world impact?’”

McLaurin went on to receive a master’s in Italian at Notre Dame after earning a Jack Kent Cook Foundation scholarship, which each year is awarded to just 43 graduating seniors nationwide.

In the eight years since he graduated from the College of Arts and Letters, McLaurin has earned his law degree, clerked for a federal appellate judge, worked for the U.S. Department of Justice at home and abroad, and represented the government in cases ranging from drug-trafficking crimes to white-collar fraud.

He traces it all back to what he learned at Notre Dame.

“I’ve had many great opportunities to do some fascinating things.”