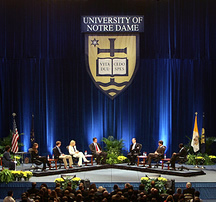 Michael Dewan contracted malaria while serving in Uganda through a program coordinated by Notre Dame’s Center for Social Concerns.

Now a senior science preprofessional studies major at Notre Dame, he had been working primarily as a schoolteacher, but then began serving as a laboratory technician at an understaffed clinic in the city of Njeru. While taking blood samples and testing them for HIV, malaria, hepatitis and tuberculosis, he contracted malaria himself.

For the majority of the people with whom Dewan worked, contracting the disease can be the equivalent of a death sentence. But, Dewan, with the financial resources and medical care that generally is unavailable to a typical Uganadan, was ill for only a week or so.

Perhaps the most maddening aspect of his experience is that the cost of the treatment he received was the equivalent of $8 in U.S. currency.

“It was so frustrating that there was so much suffering,” Dewan said Thursday (Sept. 14) as a panelist in the second annual Notre Dame Forum.

Dewan’s story is tangible testimony to the massive inequalities in health care worldwide, the topic of this year’s forum. Titled “The Global Health Crisis: Forging Solutions, Effecting Change,” the event was held in Notre Dame’s Joyce Center before an estimated audience of 3,600 students, faculty, staff and members of the local community.

Sachs, a professor at Columbia University, described the hope and frustration in his work as director of the UN Millennium Project. The project’s goal is to reduce extreme poverty,disease and hunger by 2015.

“We have tools that are incredibly powerful, we just don’t use them,” said Sachs, author of the best-selling book “The End of Poverty.”

Sachs said that, in his travels to scores of poor villages worldwide, he is always inspired by the people he meets.

“With community, there is spirit, hope … and a way forward,” he said. “I’ve yet to see a place in the world where the villagers aren’t fighting for their futures and their children’s futures.”

Sachs said that it would cost $1.5 billion – the budget for the U.S. Department of Defense for one day – to cover all of the sleeping sites in Africa with nets that would protect people from malaria.

“The biggest obstacle” to solving the problems of poverty and disease, he said, “is the sense that many people have that there isn’t an answer. Americans don’t oppose the idea of helping, and when they learn of the practical solutions, they are ready to act.”

“Don’t ever let anyone tell you,” he said, “that we can’t beat poverty and disease.”

Farmer is a professor of medical anthropology at Harvard University and the founding director of Partners in Health, an international nonprofit organization that provides direct health care, research and advocacy on behalf of those who are sick and living in poverty.

Using the example of the struggle against HIV in Lesotho, Farmer cited the need for a flexible approach in addressing global health issues.

“There has been a long-standing debate about the various alternatives and strategies which are needed,” he said. “However, it is hard to claim that any one individual intervention is more effective than another. Situations simply change too rapidly.”

Farmer cited the effectiveness of funding strategies for global health problems that address multiple social problems, rather than simply a specific disease.

“In many cases, a physician would say that the patient has died of `consumptive disease,’ which is simply another way of saying they died from hunger,” he said. “We needto address multiple social justice issues, not only the particular problem in question.”

Opwonya, coordinator of clinical trials for anti-retroviral HIV/AIDS therapy at Uganda’s Makerere University Infectious Diseases Institute and former coordinator of an HIV/AIDS home-based care program in the city and suburbs of Kampala, addressed the relative effectiveness of condom distribution efforts versus programs aimed at changing behaviors. While acknowledging a degree of success from condom programs, she cited the longer-term benefits of behavior change, especially changes in women’s behavior, such as more informed and independent sexual choices and greater resistance to polygamy.

In addition to Dewan, one other Notre Dame student and two graduates of the University participated in the forum.

As the forum concluded, Notre Dame’s president, Rev. John I. Jenkins, C.S.C., announced that Raymond Chambers, a University Trustee, had made a gift to theMillennium Project in Notre Dame’s name.

The Notre Dame Forum was established last year by Father Jenkins to annually assemble world leaders on campus to discuss the leading issues of the day. The forum seeks to engage the entire campus community in these important conversations to better formulate solutions and effect positive change. The 2005 forum addressed the role of religious faith in a plural world.

The theme for this year’s forum was selected to coincide with Thursday’s dedication of Notre Dame’s new Jordan Hall of Science, a $70 million, 200,000-square-foot building that contains the most advanced scientific and educational teaching instrumentation of any university facility in the nation.

Originally published by Dennis Brown at newsinfo.nd.edu on September 14, 2006.