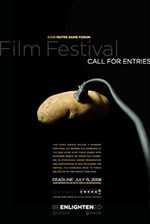 Six original films exploring the theme of sustainability will be featured during the 2008 Notre Dame Forum Film Festival to be held Sept. 19 (Friday) at 7p.m. in the Browning Cinema of the University of Notre Dame’s DeBartolo Performing Arts Center.

Introduced in support of the Notre Dame Forum, focused this year on sustainable energy, the juried festival of short films will showcase the work of primarily student filmmakers, with Notre Dame faculty and staff associated with the forum, the Office of Sustainability, and the Department of Film, Television, and Theatre serving as judges.

The festival committee opened the festival to filmmakers nationally “to encourage action, and to engage people in the topic of sustainable energy,” said Jon Vickers, managing director of the performing arts center, which also is planning screenings of commercially recognized documentaries about energy and sustainability, including “An Inconvenient Truth” and “Who Killed the Electric Car?”

The winning film will be announced during the festival screening; the top prize is a Macbook computer with Final Cut Express, professional film editing software.

The winner will be identified among the following:

Other short films on the sustainability theme will augment the six entries to round out the program.

“Sustainable Energy: A Notre Dame Forum” will take place Sept. 24 from 3 to 5p.m. in the Joyce Center on the Notre Dame campus and will explore how charting pathways to a sustainable energy future is emerging as one of the world’s great challenges. It also will examine underlying concerns, including technological, environmental, economic, political and geopolitical issues, as well as social justice and ethical considerations.

For more information about the forum, visit http://enlighten.nd.edu/ on the Web.

Originally published by Gail Hinchion Mancini at newsinfo.nd.edu on September 05, 2008.