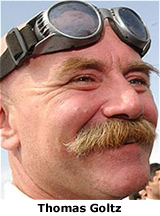 Journalist Thomas Goltz, a former war correspondent who covered post-Soviet conflicts during the 1980s and ’90s, will deliver a lecture titled “The Chechen National Disaster and Other Conflicts in the Post-Soviet Caucasus,” at 4:30p.m. Monday (Nov. 13) in the Annenberg Auditorium of the Snite Museum of Art at the University of Notre Dame.

Sponsored by the Program in Russian and East European Studies, the presentation is free and open to the public and will include a discussion and video.

Currently a visiting scholar at the University of Montana at Missoula in its Central and Southwest Asia Studies Program, Goltz spent some 20 years in the field as a freelance journalist, covering wars in the post-Soviet Caucasus – the region in eastern Europe and western Asia between the Black Sea and the Caspian Sea which today includes Russia, Georgia, Armenia and Azerbaijan.

Goltz has written for The New York Times, Los Angeles Times, Washington Post, Wall Street Journal, The Nation and Soldier of Fortune. He has authored three books based on his experiences, the first of which, “Azerbaijan Diary,” (M.E. Sharpe, 1999) has been hailed as “essential reading for all post-Sovietologists.” His second book, “Chechnya Diary,” was published in 2003 by St. Martin’s Press, and his most recent book, “Georgia Diary” was published earlier this year by M.E. Sharpe.

Other sponsors include the Nanovic Institute for European Studies, the Kellogg Institute for International Studies, the Department of German and Russian Languages and Literatures, and the Gallivan Program in Journalism, Ethics and Democracy.

Originally published by Susan Guibert at newsinfo.nd.edu on November 07, 2006.