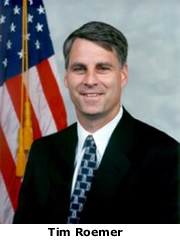 Former U.S. Rep. Tim Roemer will present a talk titled “Safeguarding America: National Security in the 21st Century” on Sept. 14 (Thursday) at 7:00p.m. in the DeBartolo Hall auditorium at the University of Notre Dame.

Following the terrorist attacks of Sept. 11, 2001, Roemer was the key sponsor of legislation to establish the National Commission on Terrorist Attacks upon the United States, known as the 9/11 Commission.

Roemer, who earned master’s and doctoral degrees from Notre Dame, currently serves as president of the Center for National Policy and is a distinguished scholar at George Mason University’s Mercatus Center, a nonprofit research and educational institution dedicated to improving public policy outcomes.

From 1991 to 2003, Roemer represented the 3rd District of Indiana in the U.S. House of Representatives. Before running for Congress, he served on the staffs of former U.S. Rep. John Brademas of Indiana and U.S. Sen. Dennis DeConcini of Arizona.

Originally published by Arlette Saenz at newsinfo.nd.edu on September 06, 2006.