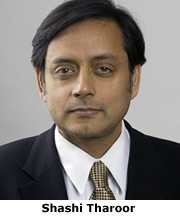 Shashi Tharoor, former under-secretary-general of the United Nations, will deliver the 13th annual Theodore M. Hesburgh, C.S.C., Lectures on Ethics and Public Policy at 4:15p.m. April 17 (Tuesday) and 12:30p.m. April 18 (Wednesday), both in the auditorium of the Hesburgh Center for International Studies at the University of Notre Dame.

Tharoor’s lecture on April 17, titled “Globalization, Terrorism and the Human Imagination,” will be followed by a reception. On April 18 he will speak on “The Future of the United Nations.” The lectures are presented by Notre Dame’s Kroc Institute for International Peace Studies and are free and open to the public.

A national of India, Tharoor concluded his nearly 29 years of service to the United Nations in February. Upon his appointment as under-secretary-general for communications and public information in 2002, Tharoor became responsible for the management of 750 staff members and field offices in 63 countries. Under his leadership, what had been a widely criticized bureaucracy was transformed into a focused, results-oriented department.

Tharoor, who earned his doctorate from the Fletcher School of Law and Diplomacy at age 22, is the award-winning author of nine books, including “The Great Indian Novel,” “India: From Midnight to the Millennium” and “Nehru: The Invention of India.” He is also a widely published critic and commentator, with columns appearing in The Hindu, The Times of India and Newsweek.

India’s candidate to succeed Kofi Annan as U.N. secretary-general in 2006, Tharoor emerged second out of seven contenders for the position. In 1998, he was named by the World Economic Forum in Davos, Switzerland, as a “Global Leader of Tomorrow.”

Originally published by Kyle Chamberlin at newsinfo.nd.edu on April 11, 2007.