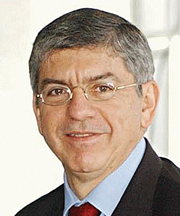 Csar Gaviria Trujillo, former president of Colombia and secretary general of the Organization of American States (OAS), is the 2008 recipient of the Notre Dame Prize for Distinguished Public Service in Latin America.

Awarded by the University of Notre Dame’s Kellogg Institute for International Studies, the prize will be presented Sept. 19 (Friday) in a ceremony on campus that will also celebrate the 25th anniversary of the Kellogg Institute, one of the nation’s premier centers for the study of Latin America.

The Notre Dame Prize carries a cash prize of $15,000. Another $15,000 is given to a Latin American charitable organization designated by the laureate. Gaviria has selected Fundacin Colombia Presente to be the recipient of the matching prize. A Colombian non-governmental organization, the foundation promotes social responsibility and tolerance among citizens at every level of Colombian society and encourages citizen participation to address social inequities.

Gaviria will be honored for his staunch advocacy of democracy and human rights in Latin America during almost 40 years of public service.

“The Kellogg Institute is tremendously excited to present the eighth Notre Dame Prize to Csar Gaviria,” said Ted Beatty, interim director of the institute. "The timing of this year’s award could not be better. The institute has established a pre-eminent international reputation in the study of democratization and democratic process in Latin America, which we are celebrating by hosting a scholarly conference on the origins of democracy in the Americas.

“While Kellogg has spent a quarter century studying democracy, Gaviria has spent a career living out the hard, daily work of creating, sustaining and deepening democracy in practice.”

In two terms as secretary general of the OAS from 1994 to 2004, Gaviria used his considerable skills as statesman and mediator to reinvigorate the inter-American agenda, ease tensions across the region, and foster regional economic integration. Under his leadership, the OAS adopted the Inter-American Democratic Charter in 2001, establishing the region’s unequivocal commitment to democracy and human rights.

The OAS is the region’s principal multilateral forum for strengthening democracy, promoting human rights, confronting shared problems such as poverty, corruption, and illegal drugs, and it plays a key role in regional conflict resolution.

Elected president of Colombia in 1990 during a time of extreme political violence, Gaviria opened up the country’s political process with a new, more democratic constitution that strengthened human rights, the judiciary, government accountability and mechanisms of popular participation. In addition, he promoted the resolution of drug violence, the reintegration of armed rebels into civil society and significant economic growth.

Extending the 25th anniversary celebration and the democracy theme, a major academic conference titled “The Origins of Democracy in the Americas, 1770s-1870s” will be held concurrently (Sept. 19 and 20). Organized by Kellogg faculty fellow J. Samuel Valenzuela and visiting fellow Eduardo Posada-Carb of St. Antony’s College, Oxford University, the conference will explore the historical roots of democracy in the western hemisphere.

Founded by Rev. Theodore M. Hesburgh, C.S.C., Notre Dame’s president emeritus, the Kellogg Institute brings comparative social science inquiry to bear on international issues relevant to contemporary society. The institute’s approach to scholarship and teaching is grounded in an appreciation for the benefits that
democratization, economic development and organized civil society may bring to citizens around the world. Known for its expertise on Latin America, Kellogg has in recent years broadened its focus to Africa, Asia and beyond.

Established in 2000 by the Kellogg Institute and funded by The Coca-Cola Foundation, the Notre Dame Prize for Distinguished Public Service in Latin America is the only award of its kind to recognize the efforts of visionary leaders in business, religion, government or the media, as well as civic activists and intellectuals, to enhance the region’s welfare.

Originally published by Elizabeth Rankin at newsinfo.nd.edu on September 12, 2008.