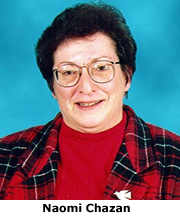 Naomi Chazan, professor of political science and African studies and director of the School of Government and Society at the Academic College of Tel Aviv, will give three lectures at the University of Notre Dame this month.

She will speak on “Can the World Afford to Abandon Africa?” at 4p.m. Oct. 10 (Tuesday) in the auditorium of the Hesburgh Center for International Studies.

A lecture titled “Options for an Israeli-Palestinian Peace: Thinking Out of the Box” will be delivered at 8p.m. Oct. 11 (Wednesday) in the auditorium of McKenna Hall

Her final talk, “What Women Bring to Peace: A Comparative Look at the Role of Women in Conflict Resolution Today,” will be at 4p.m. Oct. 12 (Thursday) in the Hesburgh Center auditorium.

Chazan was among the speakers at last year’s Notre Dame Forum on international religious issues. A native of Jerusalem, she is a former deputy speaker of the Israeli Knesset, in which she served three terms, from 1992 to 2003, as a representative of the Meretz party. A proponent of Israeli-Palestinian peace initiatives, she has founded and serves on the board of a variety of human rights, women’s rights, and peace organizations and has held visiting professorships at Harvard University and the Massachusetts Institute of Technology. She is author or editor of eight books on comparative politics, the Arab-Israel conflict and women in politics. She received the Freedom and Human Rights Prize from the Foundation for Freedom and Human Rights in Switzerland in 2005.

The lectures, which are free and open to the public, are sponsored by Notre Dame’s Holocaust Project and the Kroc Institute for International Peace Studies.

Originally published by Michael O. Garvey at newsinfo.nd.edu on October 06, 2006.