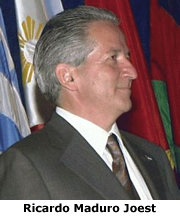 Ricardo Maduro Joest, former president of Honduras, will join a group of distinguished scholars of Latin American politics to discuss “Democratic Governance in Latin America” at 4:15p.m. Thursday (April 12) in the Hesburgh Center auditorium at the University of Notre Dame.

The speakers will discuss the present condition of democratic regimes in Latin America and suggest reasons for optimism or pessimism in the region.

Maduro served as president of Honduras from 2002 to 2006, the sixth president to be elected since 1982, when democratic elections replaced more than a decade of military rule. Under his presidency, Honduras negotiated and ratified the U.S.-Central America Free Trade Agreement.

Contact: Kelly S. Roberts, publications and communications manager at the Kellogg Institute, at 574-631-9184 or krobert2@nd.edu

Originally published by Michael O. Garvey at newsinfo.nd.edu on April 09, 2007.